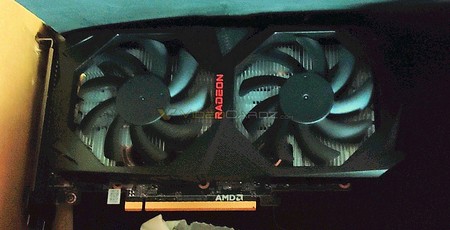 Users of a Chinese social media have been sharing images and benchmarks of an unreleased AMD graphics card. The GPU under the Baidu forum spotlight was a purported AMD Radeon RX 6600 XT manufactured by PC Partner (remember them?). Unfortunately, at the time of writing the info, images, and charts have been removed – but not before VideoCardz saved most of it. The images you see show a dual-fan cooler fitted rather generic looking 2-slot compact graphics card that is clearly labelled as a '6600XT 8G'. Putting the QR-code through a reader results in the following text string 'CW210606-00014' which doesn't provide any results via Google, and no meaningful results via Baidu, at the time of writing.

As well as the pictures of a Radeon RX 6600 XT from various angles, we get to see for the first time, the Baidu post apparently featured some screenshots from a benchmark called Ludashi. This benchmark software isn't commonly used outside of China, and I don't know a lot about it, but according to this solitary comparison, the Radeon RX 6600 XT performs similarly to the Nvidia GeForce RTX 3060 Ti. On Monday, tech site Fudzilla reported that its sources were indicating that AMD would launch both the AMD Radeon RX 6600 XT and RX 6600 in early August. It pinpointed the date of 11th August. The current expectations for the specs of these graphics cards are bullet pointed below:

Fudzilla's sources indicated that the upcoming AMD graphics cards would launch with lots of partner designs, and there will be plentiful supplies.