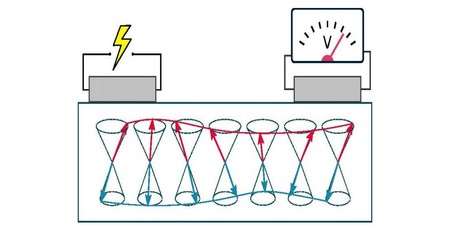 Researchers claim to have made a breakthrough in finding a potential replacement for today's semiconductor materials, successfully carrying information via magnetic waves using antiferromagnets, without the excess heat production of today's processors.

As processors grow more powerful and complex, they grow larger. As they grow larger, the size of individual components must shrink to keep the overall size of the processor down. As the individual components shrink, it becomes increasingly difficult to manage side-effects including, but by no means limited to, excess heat production - the reason why Intel's original 8088 processor was entirely passively cooled by its own packaging but a modern chip needs a large heatsink and active fan.

The experiment, carried out by physicists at Johannes Gutenberg University Mainz (JGU) in Germany, in cooperation with theorists from Utrecht University in the Netherlands and the Centre for Quantum Spintronics (QuSpin) at the Norwegian University of Science and Technology (NTNU), showed promise for use in processors operating in the terahertz range - though this part has yet to be proven experimentally.

The experiment saw platinum wires carrying an electric current placed on top of a layer of iron oxide, causing a transfer of energy to take place and creating magnons - a quantized spin wave. These magnons were then carried over the iron oxide far enough to be of use to future processor components, the researchers claim. 'This result demonstrates the suitability of antiferromagnets to replace currently used components,' says Dr. Romain Lebrun from the JGU Institute of Physics. 'Devices based on fast antiferromagnet insulators are now conceivable.'

'If you are able to control insulating antiferromagnets, they can operate without excessive heat production and are robust against external perturbations,' adds lead author Andrew Ross, with Utrecht University's Rembert Duine suggesting that the technology could find its way into real-world components within 10 to 15 years.

The team's research has been published in the journal Nature as 'Tunable long-distance spin transport in a crystalline antiferromagnetic iron oxide.' 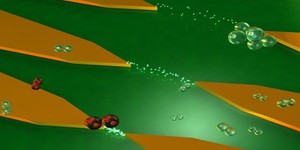