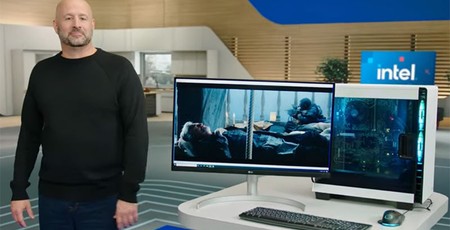 Intel held a news conference at the CES 2021 yesterday evening. The Santa Clara based chipmaker took the wraps off the 11th Gen Intel Core S-series desktop processors, codenamed Rocket Lake-S (or RKL for short), which are highly anticipated by PC DIY enthusiasts and gamers. In addition to that preview, of CPUs coming at the end of Q1 2021, we got a little insight into Alder Lake- destined for H2 2021. Rocket Lake is touted to deliver the first major architectural overhaul since Skylake's appearance in August 2015. RKL comes packing CPU cores using the Cypress Cove architecture, as well as a significant uplift for desktop integrated graphics thanks to Intel Xe graphics. Additionally, Intel would like to highlight the introduction of new AI capabilities, and 20 PCIe 4.0 lanes, as well as various ISV engine and game optimisations "to ensure that gaming plays best on Intel".

It looks like it will be a couple of months before RKL chips reach the Bit Tech-labs (or anywhere else) so it was good to see Intel provide some flagship RKL chip performance test results, indicators and charts. Remember to take these internal test results and comparisons with a pinch of salt as Intel marketing has been rather slippery in recent months. Key claims by Intel here are that the new RKL CPUs can provide 19 per cent gen-over-gen instructions per cycle (IPC) improvement. Moreover, the slide below purports to show the flagship 8C/16T Core i9-11900K has a consistent lead over the 12C/24T AMD Ryzen 9 5900X in AAA gaming at 1080p... Alder Lake is on track for launching in the latter half of the year, says Intel. It will provide "a significant breakthrough in x86 architecture," we are told. As industry watchers will know, Alder Lake is going to mix CPU core types – with high-performance cores and high-efficiency cores - in a single product. It will at last pull the desktop processor family into 10nm and a "new enhanced version of 10nm SuperFin" at that. In terms of actual product launches, Intel and partners are starting to roll out new 11th gen Core vPro, Evo vPro, N-Series 10nm Pentium and Celeron, and Core H-series mobile processors from today. This amounts to 50 new processors and over 500 new partner designs for laptops and desktops destined to be released in 2021. You can read more about these laptop and low power processors on the Intel news blog – or check out the CES 2021 news conference video embedded below.