Dubbed the ThunderX, Cavium's new processor is a system-on-chip (SoC) design based around ARM's latest 64-bit ARMv8 microarchitecture. The chips are designed to be used in dual-socket motherboards, offering full cache coherency between sockets to boost performance. Each chip features 16MB of L2 cache memory, along with 78K of instruction cache and 32K of data cache. DDR3 and DDR4 memory is supported as standard, with Cavium claiming a dual-processor system based on the processor can support 1TB of memory running at 2,400MHz.

In keeping with Cavium's target market's demands, the SoC also boasts numerous accelerators for everything from cryptography to storage and networking, along with hardware virtualisation extensions - the latter further extended through Cavium's virtSOC, offering low-latency full system virtualisation. In short: the ThunderX is something of a beast.

'The unprecedented demand for power and cost efficient workload-optimised computing driven from the data centre and cloud is a disruptive opportunity for the industry,' claimed Cavium's president and chief executive Syed Ali at the launch. 'Our strategic investment in technologies and solutions that matter to the data centre over the past 10-plus years come together perfectly in ThunderX. We believe Cavium is well positioned to be a leading vendor for the most demanding cloud workloads of the future.'

Cavium has announced four workload-optimised variants of the processor at launch: ThunderX_CP, designed for cloud servers, web caching, search and social media tasks; ThunderX_ST, designed for data storage; ThunderX_SC, designed for security appliances; and ThunderX_NT, designed for media servers and large-scale embedded network appliances. Each will be available in up to 48-core designs - a total of 96 cores per motherboard - and at speeds of up to 2.5GHz.

Numerous companies, including Facebook and Google, are eyeing ARM-based processors as the next big thing for the data centre. Where x86 parts from Intel and AMD have the outright single-thread performance crown, many-core low-power ARM parts can often afford better performance-per-watt for highly-parallel workloads. Recently, however, the push for ARM in the data centre took a hit when pioneer Calxeda hit financial difficulties owing to delays on ARM's 64-bit architecture.

Sampling of ThunderX parts is to begin at the end of the year, Cavium has promised, with pricing and mass availability yet to be confirmed. 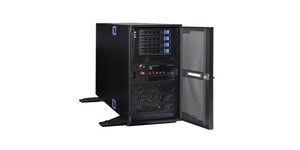