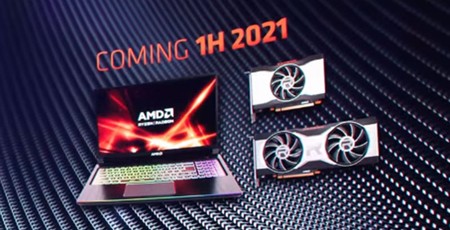 AMD CEO Dr Lisa Su hosted a keynote at the virtual CES 2021 yesterday evening. Su used the platform to talk about the importance of high-performance computing in people’s daily lives plus the digital transformation of home and work environments. The latter portion of the presentation was more interesting, with AMD announcing its highly anticipated Ryzen 5000 Series Mobile Processors, a number of new 65W Ryzen 7/9 chips (for OEMs only, sadly), and ended by slipping in a teaser for 3rd gen AMD Epyc, and there was also a sneaky teaser for the upcoming Radeon RX 6600 / 6700 graphics cards for the eagle-eyed. It has been a year since the launch of the Ryzen Mobile 4000 processors with which AMD made major inroads into the laptop market and it looks like it should be able to do even better with 'Cezanne' which feature the newest Zen 3 CPU cores. If you check the product table above you will see, however, that a couple of the new 5000 series chips still feature Zen 2 tech (the 'Lucienne' chips highlighted in yellow), just to confuse things. The table below provides an overview of the new model specs. You can see the H series is the more powerful, destined for desktop replacement gaming and creator types. These processors boast up to 8C/16T, boost speeds up to 4.8GHz, in power budgets up to approx 45W. AMD hopes to address the thin and light portable market with its performance/efficiency balanced U series with up to 8C/16T, and TDPs up to 15W. AMD claims its new mobile processors, like the AMD Ryzen 7 5800U processor offers:

Already we are seeing partner announcements with luscious laptops featuring these new AMD processors and mobile GeForce RTX 30 graphics from Nvidia - from the likes of Asus, Lenovo, and HP. These will emerge starting in the current quarter according to AMD with most partners launching numerous machines before H1 is over.

One of the slides shown behind Dr Lisa Su during her presentation revealed that as well as the partner laptops H1 would include launches of what appears to be the Radeon RX 6600 / 6700 graphics cards. So at least we got a significant tasty morsel for desktop PC DIYers there.