AMD has announced it is making another payment to GlobalFoundries, the company formed by spinning off former AMD fabrication facilities when the chip designer chose to go fabless, in order to allow it to farm out manufacturing to third parties - but in doing so is taking a whopping $335 million charge and paying GlobalFoundries for every wafer it purchases from rivals.

In the years since AMD spun off its fabrication facilities as The Foundry Company, later GlobalFoundries, the company has made a number of major payments to its once and former subsidiary - largely relating to exclusive manfuacturing deals between the two companies. In 2012 AMD sold its final stake in GlobalFoundries and amended its wafer supply agreement in order to allow APU products to be built at rival facilities. However, that same year AMD would renegotiate again following weaker-than-expected demand for APUs, paying $320 million for wafers it had agreed to purchase but now no longer needed.

Now, the company is once again amending its deal with GlobalFoundries in an agreement which covers the next half-decade. 'The five-year amendment further strengthens our strategic manufacturing relationship with GlobalFoundies while providing AMD with increased flexibility to build our high-performance product roadmap with additional foundries in the 14nm and 7nm technology nodes,' claimed Lisa Su, AMD president and chief executive, of the renegotiated agreement. 'Our goal is for AMD to have continued access to leading-edge foundry process technologies enabling us to build multiple generations of great products for years to come.'

Under the new terms, which run through to 2020, AMD has established a framework for technology collaboration between the two companies as a means to reach a 7nm process node, set minimum wafer purchase targets - the issue which cost it $320 million back in 2012 - and has agreed terms that will allow it to spread manufacturing across additional fabrication companies. However, these terms come at a cost: AMD has agreed to pay $100 million in cash to GlobalFoundries, spread across 2016 and 2017, and will make unspecified quarterly payments to GlobalFoundries for every wafer it purchases from the company's rivals. AMD is also to issue a warrant for 75 million shares at $5.98 per share, costing it around $235 million.

In total, the new deal will see AMD hit with a $335 million one-off charge in the third quarter of this year, with ongoing costs from the third-party wafer supply agreements to continue into the future. For a company which has long been struggling financially, it's hard to see the terms of the deal in a particularly positive light. 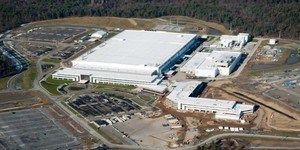