Amazon has officially entered the CPU market, launching a range of system-on-chip processors aimed at embedded devices through its recently-acquired Annapurna Labs subsidiary.

When Amazon acquired Annapurna last year, speculation was rife with regards to how a company which got its start selling books could benefit from owning a semiconductor house. When Amazon began launching devices like its Dash Button and Echo, pundits thought they had their answer: in-house know-how for building own-brand embedded systems. The company has proven itself less predictable than that, however, with the launch of a new family of chips which it is selling to all and sundry.

Dubbed Alpine, the new family of chips is aimed primarily at gateways, routers, network-attached storage, and other network devices. Available in 32-bit ARMv7 and 64-bit ARMv8 flavours and with up to four cores and 2MB of L2 cache, plus support for DDR4 memory, PCI Express 3.0, and up to 10G Ethernet connectivity, it's clear Amazon is serious about shaking up the market. While the company is only now announcing general OEM availability of the parts, it has already scored some design wins in shipping products including the Synology DS2015xs, DS1515, DS715 and DS416 and QNAP TS-231+, TS-431+, and TS-531P NAS devices.

Thus far, Amazon has not indicated plans to switch from the third-party processors it uses in its Kindle and Fire family of devices to Alpine chips or other devices produced by Annapurna. 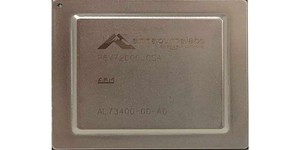