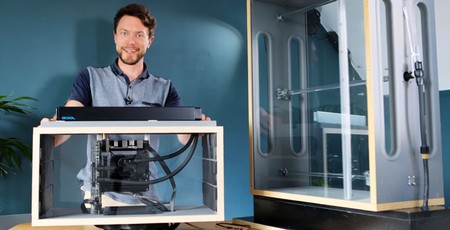 Hardware developers and engineers have aimed their expertise at PC systems cooling from a wide range of angles. Out of all the attempts made so far by far the most popular techniques are air cooling with fans, water cooling, thermoelectric cooling, immersion cooling, and let's not forget passive cooling tech - which is used alongside all the previous techniques in production model cooling devices, but can be scaled up to work alone.

Recently, one of the most popular TechTubers focussed his attention on PC cooling, using a variation on air cooling with come LCS technology thrown in. DIY Perks had built a large air bellows box in a previous episode, but has revealed the actual intention was to use this contraption as a 'bolt on' cooler for a PC build.

The air bellows section relies on a box with a central barrier which moves from side to side. It features some Perspex construction, so you can see inside, but is mostly structural MDF. The video starts by introducing this contraption and how DIY Perks refined the central membrane movement mechanism to be powerful, yet smooth and quiet. About a quarter the way through the video, the YouTuber introduces the PC components and an add-on chassis construction that will be used to measure the effectiveness of the bellow-powered cooler. These are indeed powerful and potentially hot components; the AMD Ryzen 5950X, an Nvidia GeForce RTX 3080, as well as lashings of RAM and storage. Meanwhile, the GPU cooling shroud is replaced by a water block, and the CPU has a pump / reservoir strapped to it. Both these high-wattage components are connected to the LCS. However, please note the large LCS radiator won't have fans – instead it will be 'fed' be the bellows breathing through it.

How did the system perform? DIY Perks ran a few CPU and GPU stressing benchmarks to try and whip up some heat. During the tests, the CPU appeared to hit 60°C maximum, and the GPU reached a plateau at 62°C. These cooling results impressed the YouTuber, as previously the air shifted by the bellows system was measured to be roughly equivalent to four case fans. Overall it was felt the project delivered a pleasingly organic 'breathing' PC which was amply cooled – though some refinements will definitely be worked on to make it even quieter and smoother running.