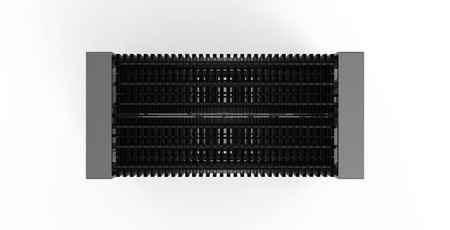 Cases, power, and cooling specialist Streacom has started to tease a new fanless case on social media and Kickstarter. The case looks a lot like a fish tank or aquarium to my eyes, but this isn't going to be a fancy immersion cooling case, instead the large finned block on covering the top is the is where all the cooling tech is collected.

The fanless fans over at Fanless Tech spotted the new project on Twitter. Furthermore, the Fanless Tech reporters did a bit of detective work and found that Streacom has taken the reins of the Calyos Kickstarter project, to help give its aspirations some wings. Having digested the above links you will become aware that the large black finned block atop of the glass tank isn't just a portly radiator, a massive passive heatsink. No, it is very probably "an evaporator, and the two heat pipes are clearly designed for a Freon-type refrigerant," and likely to use 2-phase cooling tech that was originally proposed for the Calyos NSG-S0.

If Streacom puts the project back on track, as the new SG10, then we are promised a case with special appeal and great cooling performance. The source says that the cooling design is said to be capable of taming a system packing a CPU up to 195W and GPU up to 420W without much of a murmur, and no fans whirring. In a Kickstarter update published on Tuesday it was claimed that the performance of the latest prototype was in line with expectations for an OC Intel CPU pulling 300W. The project seems to be at a pivot point now, and it is worth keeping an eye on how Streacom can help realise the Calyos 2-phase cooling PC dream.