NZXT has announced the impending launch of the Grid, an internal fan hub designed to bring one of the key selling points of its Switch 810 case to the mass market.

Previously available only within selected NZXT cases, the Grid is an internal fan controller designed to take on the task of powering up to ten fans using a neat modular cabling arrangement. Powered by a single Molex to 3-pin power adapter connected at the base, included in the box and measuring 200mm, the Grid provides ten three-pin outputs split into two banks of five at either side.

Designed to tidy up the cabling within a system, the Grid is designed to be hidden away in the case somewhere at the mid-point of the fan layout. Each fan then runs to the Grid unit, providing a means of simplifying cable management and reducing the number of extraneous power cables dotted around the place. A white LED is provided for power indication, although this is largely unnecessary: the Grid works best when hidden in the depths of your case's cable management section, and if the fans are spinning you know you've got power.

The bundle itself includes the Grid fan hub, the 200mm Molex power adapter, a 200mm three-pin female to female adapter, two 200mm cable extensions for otherwise out-of-reach fans, and a set of five black cable ties to tidy everything up. Sadly, the Grid does not include any control capabilities: it's a dumb hub, providing power only to the ten connected fans and not allowing any control or monitoring of speed.

That, however, is being reflected in the price. While full UK pricing and availability have yet to be confirmed - NZXT will only say that it is 'coming soon' - the Grid is being launched in the US at a recommend retail price of $11.99 (around £8 excluding taxes.) Whether it will win modders and system builders over from the alternative of using extension cables and splitters to power masses of fans, however, remains to be seen. 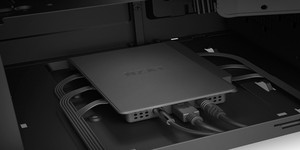