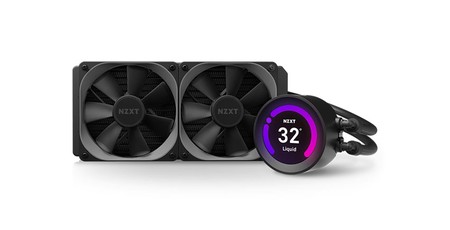 PC cases and cooling specialist NZXT has expanded its Kraken AIO liquid CPU cooler range by adding SKUs to its Kraken X-3 and Kraken Z-3 Series. The Kraken X-3 Series gets NZXT Aer RGB 2 fan equipped models, and the Z-3 Series gets a new radiator option – one cooled by twin 120mm fans. All these coolers are compatible with most mainstream CPU sockets, such as the Intel LGA 1200 or AMD AM4 sockets.

If you want to maximise your PC's RGB LEDs and have yet to fit an AIO liquid cooler, NZXT reckons that the new entrants to the Kraken X-3 family will please your eyes. The new Kraken X-3 variants sport NZXT Aer RGB 2 fans, as well as the iconic RGB infinity mirror design with an enlarged ring size. Furthermore, buyers will find that these new additions come with the latest 7th generation pump from Asetek.

Key features of the Kraken X-3 RGB Series include their commendably quiet operation thanks in part to the new fans with winglet tips, and fluid dynamic bearings. As mentioned above these fans provide a healthy dose of dazzling RGB LEDs too.

Three new Kraken X-3 RGB Series AIO coolers have been released, available immediately worldwide, and they are available in the following radiator sizes, with prices provided in USD/GBP:

There is just one addition to the Kraken Z-3 AIO cooler series. The new Kraken Z53 features a 240mm radiator, joining the previously released 280mm and 360mm options. One of the appealing features of the Z-3 Series is the LCD screen equipped. The new cooler features a 2.36-inch (60mm) LCD screen which provides unlimited visual customisation and is capable of displaying vital system health data as well as any custom image or animated GIF via NZXT CAM.