Noctua releases chromax.black versions of its NH-U12A and NF-A12x25 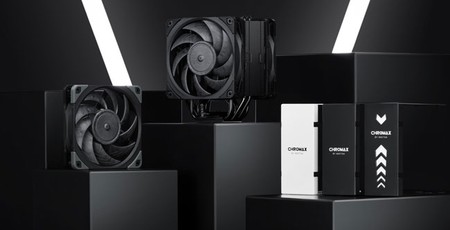 Black versions of the Noctua NH-12A CPU cooler, and the NF-12x25 fans are now available. These 'chromax.black' products have been on Noctua's roadmap for quite some time but, eagerly anticipated as they are, have only just been released to retail. On the delay, Noctua commented that changing a product colour isn't as trivial as it sounds, especially when it is "fine-tuned to the most minute details". Furthermore, it had to face pandemic-related delays.

Bit-Tech reviewed the Noctua NH-U12A in its traditional brown and cream livery in May 2019 (where it gained a 'Bit-Tech Exceptional' star rating. Noctua says that this is the very same product "fusing best-in-class cooling performance with superb quietness of operation and outstanding compatibility," just this time it is in black - all black – that includes fans, plastics, and metal parts. As we near the Intel ADL-S era, Noctua assures us that its latest SecuFirm2 multi-socket mounting system supports not only AM4, and LGA1200, but LGA1700, too. According to a recent video from AMD, AM5 won't need any different cooling mounts either.

The Noctua NH-U12A comes with twin NF-A12x25 fans, and in the case of the chromax.black version of the cooler these will be the new NF-A12x25 PWM chromax.black.swap models, which have also been launched to buy separately.

Noctua's black NF-A12x25 fans are said to carry forward the original product's performance and noise characteristics, of course. This NF-A12x25 PWM chromax.black.swap comes with swappable red, white, blue, green, grey, yellow and black anti-vibration pads – good for colour matching in various build-schemes you might dream up.  If you are interested in white fans from Noctua, the roadmap indicates that it is readying some such products for Q1 2022. As well as the above black parts, Noctua has announced new NA-HC7 and NA-HC8 heatsink covers for the NH-U12A and NH-U12A chromax.black. The NA-HC7 comes with swappable colour inlays in black, blue, green, red, yellow and white; and the NA-HC8 comes in black or white.

Noctua advises that you can buy all the above new chromax products via its Amazon web stores, which cover many world regions.