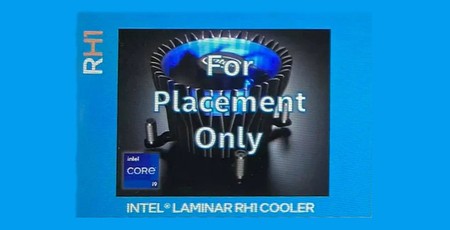 Intel hasn't updated its stock/retail box/reference CPU coolers for quite some time. The last update to its standard top-down air cooler, the BXTS15A for its 'K' processor cooler was in Q3 2016, and the similar but more compact (shorter) BXTS13A was launched back in Q2 2014. Now, with Alder Lake on the horizon, coming in a rather differently proportioned package, it seems to have seen fit to redesign its air cooling standards.

A Twitterer by the name of Ayxerious, via VideoCardz, has shared an image of a purported Intel thermal solution lineup for ADL-S CPUs. According to the screen-grab, there are three new 'Laminar' air coolers in the pipeline for Intel's new LGA1200 socketed 12th gen Core processors.

Checking over the above, you can see that these are only suitable for the clock/multiplier locked processors from Intel's stables, up to a max of 65W. Intel appears to be preparing the Laminar RH1 for Core i9 processors, the Laminar RM1 for Core i7, i5, and i3 processors, and the Laminar RS1 for Pentium and Celeron processors that will plop in the LGA1200 socket. If all the chips are 65W, then you might wonder about the need for three boxed cooler designs – the reason is in the PL2 values, the higher wattages used to achieve and maintain advertised CPU turbo speeds.

It is hard to know if the cooler images give anything away with regard to upcoming designs. It is clear that all three cooler images have been marked "for placement only" – meaning the images might not be representative of the actual shipping cooling accessories. However, the 'premium' design does appear to feature LED lighting, as a tip of the hat to rival AMD with its standard Wraith line for customers.

While these Intel coolers might be good for a stopgap of a menial office machine under your desk, most enthusiasts / gamers can spend relatively little to acquire an upgrade that will deliver both improved thermals and acoustics – as well as improved sustained turbos on appropriate chips.

Intel is going to launch the first ADL-S chips later this year, but the lineup will be limited to the enthusiasts 'K' and 'KF' parts, probably sold without any bundled cooler of any type. For the 65W parts, which might retail with these top-down air coolers, you will probably have to wait until sometime in Q1 2022.