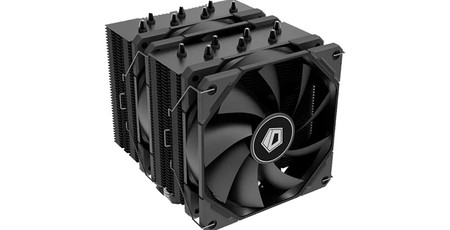 Cooling specialist ID Cooling has launched two new entrants into its SE-207-Series of Mega Coolers. These twin tower CPU coolers include dual fans and 7 heatpipes and are built to accompany CPUs with a TDP of up to 280W. The ID Cooling SE-207-XT Black is ready for AMD AM4 processors as well as Intel LGA1200/115x/20xx form-factors. There is an SE-207-TRX too, with a few modifications, that is designed to be strapped onto your AMD Ryzen Threadripper (TR4) processor. Whichever cooler you choose, it will come with a pair of 120mm fans which run at 700RPM ~ 1800RPM, providing up to 76.16CFM air pressure, and up to 35.2dBA. These are affixed, in push pull config, either end of a finned black aluminium heatsink which is laced with seven copper heatpipes. The SE-207-XT Black features a solid copper baseplate. Meanwhile, the Threadripper purposed SE-207-TRX design uses a baseplate that employs direct-touch heatpipe technology.

You will need a case that will accommodate a 144mm (TRX) or 140mm (XT) tall cooler on the CPU. The other dimensions of this twin tower cooler are identical at 122 x 157mm. Users may also have to take care of potential memory module height issues, depending upon the modules you use and motherboard. So, these aren't very compact coolers but what did you expect of a 'Mega Cooler'? Pricing is expected to be in line with high-end air cooling competitors.