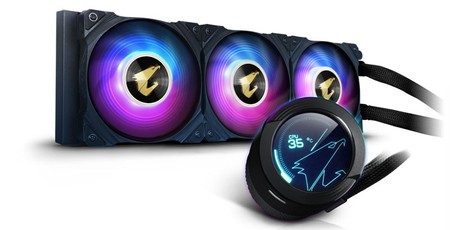 You are probably more aware of Gigabyte's WaterForce AiO GPUs than its AiO CPU coolers. Bit-Tech has reported on and reviewed a number of high-end (Nvidia) GPUs with WaterForce cooling over the generations. However, Gigabyte released an AiO CPU cooler series dubbed the Aorus AiO CPU liquid coolers back in Q3 2019, and it has announced the release of their successors this week.

The new Aorus WaterForce X AiO CPU coolers come with the familiar 360mm, 280mm, and 240mm radiator options that their predecessors, and many rivals, provide to consumers. On the surface it looks like nothing much has actually changed compared to the previous offerings from Gigabyte.

Gigabyte's press release provides some key information of where the changes, and improvements, have been made. The tweaks to create the new WaterForce X range appear to concern the vital areas of liquid flow rate and fan efficiency, as well as the frills-only change to make the circular LCD display on the pump easier to showcase ambitious content. Cooling performance uplifts are claimed by Gigabyte for the functional changes as follows:

In addition to the above, aRGB and custom PC enthusiasts might be pleased with the extended capabilities of the 60mm diameter pump display (thought it makes the pump cap 74mm tall – 14mm taller than its predecessor). As well as offering the Enthusiast Mode, Function Mode, Text Custom Mode, and Image Custom Mode, the new RGB Fusion 2.0 / Aorus Engine powered AiO improves the Image Custom Mode with wider format support (MP4/ GIF/ JPG) and the basically unlimited storage capacity afforded by microSD card interface.

I don't have pricing and availability at this time. Product pages are linked to directly below.