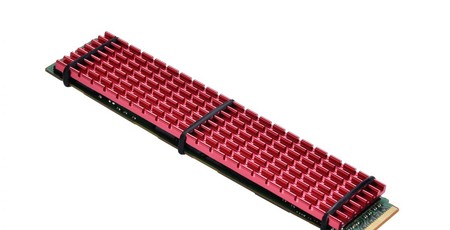 Gelid has unveiled its latest cooling kit for the M.2 Type 22110 Solid State Drives, with an aim to improve performance and increase durability.

The SubZero M.2 XL is a part of Gelid's Gamer product line and despite what the name suggests, is actually a not so fancy-looking aluminium heatsink. Between its slim aluminium heatsink and specially crafted thermal pads, Gelid hopes that it will deliver the best heat transfer for users, providing significantly lower operating temperatures for memory ICs and other components within the M.2 Type SSD.

It does all this by working towards reducing thermal throttling. In case you've forgotten what thermal throttling actually involves, it's where the frequency of an IC can be automatically adjusted to reduce the amount of heat generated by it. When your system is working hard, such as while dealing with a high-end game or some complex computing, excessive amounts of heat can be generated by the SSD controller due to a high number of read/write operations. That's not good for anyone, especially the components.

To cool it down, an automatic duty cycle is applied and the effective SSD frequency becomes lower. Overall, performance degrades while the SSD cools down. The purpose of the Sub Zero M.2 XL is to stop that happening without any performance loss.

In theory, it's simple to install with Gelid bundling in a set of three silicone ring fixtures so you can easily mount the heatsink on to your SSD. It fits all standard M.2 Type 22110 SSDs, including those for laptops as well as desktops. That's a particularly important bonus given some users might be tempted to simply buy a small heatsink and glue it onto the SSD themselves with thermal adhesive. The Sub Zero M.2 XL makes it a lot simpler for those who want a neater solution.

Not all users will need the Sub Zero M.2 XL, of course, given the performance improvements seem like they'd be relatively minimal unless you're constantly putting your PC through its paces, but at only $10 or €9, it seems like a small price to pay to be extra careful. UK pricing hasn't been announced but expect it to be around that figure.