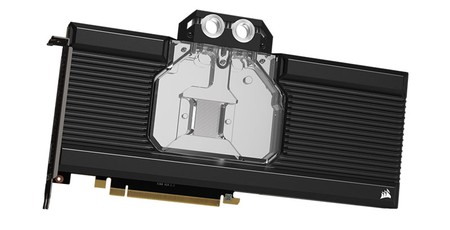 Corsair has announced that it has launched a wide range of Hydro X series water blocks for Nvidia GeForce RTX 30 series graphics cards. The new Corsair Hydro X Series XG7 products have become immediately available, and cater for cards such as the Nvidia Founders Edition, Asus ROG Strix, MSI Ventus "and dozens of reference designs". You can check out the full Hydro X Series XG7 range and a compatibility list detailing supported graphics cards models on the Corsair website.

The new Corsair water blocks are claimed to offer "unrivalled aesthetics," though of course beauty is in the eye of the beholder. They feature a design influenced by the Corsair Dominator Platinum RGB memory, and indeed they do feature aRGB – with 16 separate RGB LEDs at your disposal. You can easily control and sync the lighting via Corsair iCue, via an RGB controller, or compatible motherboards with 5V aRGB adapters. Digging deeper you will find a water block with 50 high density cooling fins, designed with 'total conversion' in mind. That means the bock totally covers all heat producing graphics card parts such as GPU, memory, and VRMs. Specifically for the GPU and surrounding area, there is a precision CNC cut nickel-plated copper cold plate. There is pre-applied thermal material and thermal pads where needed. Last but not least Corsair supplies a full length aluminium backplate to make sure your graphics card is fully protected.

As mentioned in the intro, Corsair is making its Hydro X Series XG7 products available immediately via its web store and worldwide partners. Depending upon your graphics card model expect to pay about US$160 or thereabouts. Buyers get a three year warranty