Be Quiet! has announced a new CPU cooler for compact builds, the Shadow Rock TF2, with claims of supporting up to a 160W thermal design profile (TDP) with a peak height of 112mm including the fan.

Designed around the company's previous Shadow Rock TopFlow, the Be Quiet! Shadow Rock TF2 is designed to take the advantages of a tower-style cooler - namely larger surface area for cooling fins compared to a normal top-down cooler - and flatten it out to squeeze into mini-ITX builds where vertical clearance is at a premium. As a result, the heatsink measures just 112mm in height including the bundled 120mm fan with a 137mm x 165mm peak footprint designed to overhang the motherboard. The fan is positioned to blow down through the fin stack, cooling both the CPU and any motherboard-mounted components such as RAM modules or voltage regulator modules (VRMs) in the nearby area.

According to Be Quiet!, the Shadow Rock TF2 is built for 'significant quiet [sic]', offering a peak fan speed of 1,400 revolutions per minute (RPM) for a peak airflow of 67.8 cubic feet per minute (CFM) at a noise level below 20.8 dBA. The fan, based on rifle bearings and with a four-pole motor, includes a four-pin pulse width modulation (PWM) connector, while the heatsink includes thermal grease pre-applied to the base.

The Shadow Rock TF2 is due to hit the channel any day now, priced at £54.99 (inc VAT). The cooler does not yet have a page on the company's official website, however. 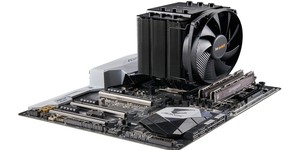