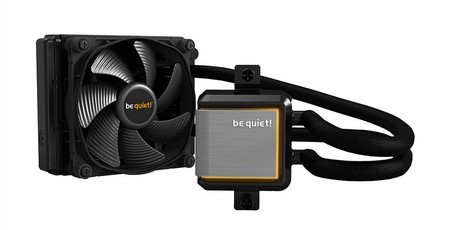 be quiet! entered the AiO CPU cooling market with its Silent Loop series back in 2016. The coolers won admirers for their accessible pricing, unfussy performance, quiet pump/fan combo, and sober but functional aesthetic – no RGB lights here on either the pump or the radiator. Now the German PC components firm has launched the Silent Loop 2 AiO CPU coolers and there has been a bit of a shakeup in some departments. The be quiet Silent Loop 2 series of coolers come with your choice of 120, 240, 280, or 360mm radiator. One of the big changes under the hood is the switch from a so called decoupled reverse-flow pump to a new design said to be a powerful three-chamber design with great low noise and vibration characteristics. Moreover, this dampened and adjustable pump employs a six-pole motor for further gains in performance and reduced noise. As the Silent Loop 2 AiO CPU coolers are not going to be distributed in the US, I am pondering whether this design treads on the toes of Asetek AiO US patented tech.

Another change-up with the Silent Loop 2 is the introduction of Silent Wings 3 PWM high-speed fans for quiet performance. The flexi tubing looks to be different spec too, but I can't see this indicated in the data sheets, unfortunately. A pleasing introduction for HEDT users might be the new AiO cooler's compatibility with sTRX4 / TR4 sockets – but you will have to order an accessories kit for be quiet!

Last but not least, be quiet! has introduced aRGB lighting to the Silent Loop 2. The lighting is just a three sided border around the edges of the cooling block. It is full aRGB LED illumination, and looks quite subtle in the video. That's all you get in terms of lighting by default through as neither the radiator nor fans sport any further aRGB LEDs.