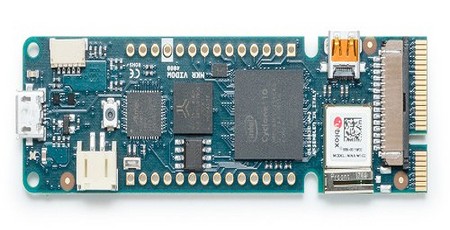 Arduino, the company behind the growing family of mostly-open microcontroller development boards bearing its name, has announced that it is getting into the entry-level field-programmable gate array (FPGA) market with the launch of the MKR Vidor 4000.

Part of its MKR range, launched with makers rather than the education sector in mind though applicable to both, the MKR Vidor 4000 marks the first Arduino board to feature a field-programmable gate array (FPGA) - a chip which, using nothing but a hardware definition language, can be told to act like almost any other chip. Designed to bridge the gap between general-purpose processors and application-specific integrated circuits (ASICs), FPGAs can be focused on a particular task and run it considerably more efficiently than the same task defined in software running on a general-purpose CPU.

'This year I’m extremely excited about the launch of the most flexible Arduino ever, the MKR Vidor 4000 and the development environment vision around it,' said Arduino chief executive Fabio Violante at the board's launch during the Maker Faire Bay Area event this weekend. 'With this new product we aim at putting in the hands of professionals, makers and educators the electronic equivalent of a resourceful Swiss Knife to bring their creativity to the next level. The applications are countless.'

The FPGA portion of the development board includes 16,000 logic elements (LEs), 504kb (kilobits) of embedded RAM, and 56 18x18-bit hardware multipliers, and is capable of toggling pins at frequencies of over 150MHz. The MKR-format pins themselves, meanwhile, are shared between the FPGA and a general-purpose Atmel SAMD21 microprocessor, while the FPGA also benefits from access to an additional 25 pins exposed as a mini-PCI Express (mini-PCIe) format connector on the end of the board.

The MKR Vidor 4000 also promises graphical capabilities missing from the majority of its brethren: The FPGA can be programmed with cores for digital signal processing and linked to an onboard micro-HDMI connector and a MIPI Camera Serial Interface (CSI) connector. Communication between the FPGA and the SAMD21, Arduino claims, is entirely seamless. A U-Blox Nina module provides Wi-Fi and Bluetooth Low Energy (BLE) connectivity.

Full details on the MKR Vidor 4000, pricing for which has not yet been disclosed, are available on the Arduino Store.

Intel taking the fight to Atmel.