Quantum computing has been threatening to kill off traditional digital computing for a long time now, with various scientific journals hailing its approach. Well, perhaps a few years earlier than we expected, the world has seen the first demonstration of a commercial grade quantum computer in action.

A quick primer: quantum computers don't rely on bits to structure data. Instead, they work by assuming that the quantum properties of particles can be used to represent data structures. Rather than bits, these quantum data structures are called qubits. Since quantum computers deal with such tiny, tiny measurements and nuances - the behaviour of matter and energy at the subatomic scale - the potential for computing power is absolutely massive.

At least, I'm pretty sure that's what Wikipedia says.

DWave Systems is a Canadian company, and they've built working hardware that computes at a quantum level. They're running 16-bit qubit computations at the moment, but hope to expand that to 32-qubit by the end of the year.

To work, the hardware has to be chilled down to -273 degrees centigrade. That's colder than outer space, and would make for a pretty decent Core 2 Duo overclock, we suspect.

Because of the massive scale that quantum physics operates on, quantum computers are thought to be perfect for solving problems that are simply to great for traditional computers to operate on, such as life sciences and theoretical physics. In theory, a single quantum computer should be multiple times more powerful than the fastest supercomputer cluster in existence today.

It's unlikely that we're going to see quantum computers on the desktop any time soon, but it seems like Ray Kurtzweil's theory of technological singularity, where machines are more intelligent than people, could be upon us.

What do you make of all this technological insanity? Let us know over in the forums. 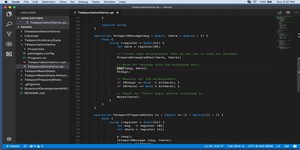