Google has opened its first retail outlet in London. The company has chosen to partner with the Dixons Group, specifically Currys and PC world, and the first 'Chrome Zone' outlet has opened inside the Tottenham Court Road branch of PC World.

The company is giving potential punters a chance to try out the latest Chromebooks, and a visit to the store will give you the chance to get first-hand experience of the cloud computing-based, browser-orientated Chrome OS in action.

'The Chrome Zone is designed to be as open, colourful and user-friendly as possible, and there are seating areas for shoppers to enable them to try out Chromebooks in comfort,' Google said in a statement.

The Chromebook has only been available so far via online etailers such as Amazon and PC World, which don't offer a way to try out the devices first. As such, Google is clearly hoping that more people will buy a Chromebook after trying one first-hand.

According to Arvind Desikan, Google UK's head of consumer marketing at Google UK, the company had 'found anecdotally that when people tried the Chromebook and played with it, that made a huge difference to their understanding of what the Chromebook is all about.'

In a similar fashion to Apple's stores, experts will be on hand to advise potential buyers, with the first snaps of the store appearing to show equally flashy-looking interiors to its competitor.

Have you taken a Chromebook for a spin yet? Do you think the retail store will help Chromebooks to catch on? Let us know in the forum. 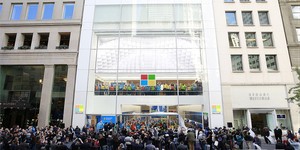