Getting your game onto Steam is major effort

I launched my game on Itch.io in March, last year. In December, while looking back at what I'd done in 2016, I decided to try to get the game on Steam. Here's some of what that entails:
There's a lot of other little bits and pieces, but the main thing I'm trying to get across here is that the Steam release is a lot of small fiddly tasks to meet the compliance standards of Steam.

This effort is worth it, though. In the week since I released the game on Steam, I've sold 60 copies. This, once Steam and the U.S. government takes their cuts, is around 50 dollars - the same as I made in a year of sales on Itch.io. 20something isn't going to make me rich, and it wasn't supposed to, but it's nice to think that it might break even on the time I've spent on it, one day, which is good, because... It's not going to be my full-time career. Even games journalists need to eat occasionally, and game development as an indie can be taxing even when you have the skills and connections to make it big or get contract work.

I am going to continue to make games, though, because there's just something about creating a bigger project than writing, which tends to be done and out onto the web after a day's work. Making games I can create at my own pace — no deadlines when you're working solely for yourself — and it's rewarding. I'm working on two games now; one is a more complex text adventure that I'm confident I can finish. The other involves Unity, and a game in a genre I've never even heard of before, so there's a good chance I'll be back here in another 18 months retelling the mistakes I made trying to learn a new engine on another ambitious project.

Still, if nothing else, it's more interesting to talk about at parties, and I've learnt that indie developers really do have it hard sometimes. I've never felt so precious over something I've created, and when the first review for the game came onto Steam and was entirely negative? I was disgruntled. If I can be honest for a moment, it's worth mentioning both the ease and the benefit of creating games here on a website primarily known for its nigh-obsessive interest in hardware and modding, if only for those who don't have the cash or skills for the hardware and/or tools, but still have that urge to create something. That's what led me to creating a game in the first place, and while I'll be the first to admit 20something is a bit overemotional at times, I learnt a lot, and it's been a great portfolio piece.

If you're at a loss for your next project, why not try making a game? It's easier to get started than you might think. 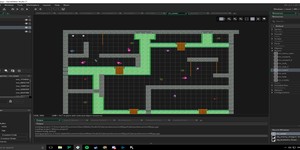