Valve has published the public achievements statistics for co-op zombie shooter Left4Dead, revealing how many players have reached each achievement and how well players are faring.

The statistics only take the PC version into account however as they are pulled directly from Steam and thus ignore the Xbox 360 version of the game.

According to the stats the most popular and easy to get achievement is 'Drag and Drop', which is gained by rescuing an ally from a smoker before they can take damage. On the other hand, nobody has yet managed to bad the 'Zombie Genocidist' award for killing 53,595 zombies total.

The majority of players seem to be having a tough time going up against the AI Director though - only 36 percent of players have finished a campaign (on any skill level) without losing at least one player and less than 20 percent have seen anyone finish the Blood Harvest campaign on any difficulty.

More proof on how hard the game can be can be seen in the more extreme achievements. Only 0.7 percent have survived a finale without taking damage and less than that have completed a campaign without being vomited on. No players have yet to get the 'Lamb 2 Slaughter' for incapacitating a survivor who has entered and left a safe room.

Only 2 percent of gamers have managed to finish any campaign on expert difficulty, with less than 0.2 percent surviving all campaigns.

You can check out the full stats list here, and read our full Left4Dead review and graphics analysis for more details. Let us know how you rank in the forums. 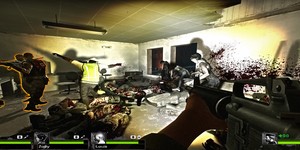