The Last of Us is to have a live-action film adaptation that is already entering pre-production.

The critically acclaimed title from Naughty Dog will be adapted by Ghost House Pictures headed up by Sam Raimi and will be distributed by Screen Gems.

The Last of Us was brought to the attention of the studios thanks to its emphasis on narrative. Wells commented to Deadline that he saw Screen Gems and Ghost House as 'a perfect fit' for the project and that many other studios have previously approached them about making a film out of the game.

Video games long ago drew the attention of Hollywood and several popular franchises currently have films in the works. Sam Raimi was also at one point attached to direct the long-awaited World of Warcraft film.

Other series that have film projects under-way include Assassin's Creed and earlier this month it was revealed that Warner Brothers is working on a film adaptation of Minecraft.

Earlier this week, Uncharted writer and creative director Amy Hennig left Naughty Dog after 10 years at the company. Early reports suggested that she had been forced out of the company by Druckmann and Straley but the two have subsequently released a statement denying that this is what occurred. 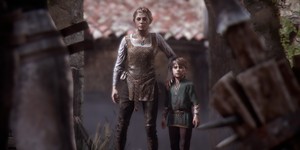