Ron Gilbert, the developer behind many of the old Lucasarts adventure games, thinks unions will play an important part in the growth of the gaming industry and that before the business can move forward the technology will need to slow to a more manageable rate.

"I think technology is moving forward really rapidly, and part of what a lot of teams do is exploring new technology, and I think that's kind of hard to do with an ad hoc thing," said Gilbert, who is currently working at Hothead Games on his new game, Deathspank.

The comments came as part of an interview with Gamasutra about the future of the industry and what part episodic gaming will play. Gilbert said that he thought that industry professionals would slowly make the move to a more Hollywood like structure, but that several things would have to change first.

One of the things that Gilbert thinks is integral to the future of the games industry is unionisation - a way to band together all the freelance developers.

"I don't think that you're going to be able to grab all of these freelance people when you need them if there isn't some kind of a union structure that's over the top of them. You can't really have a bunch of animators just floating around from job to job with nothing in between."

"I think there's going to have to be a lot more structure, and I think that's going to have to come in the form of unions - which, you know, I don't know that I really agree with that; I think unions bring a lot of bad things to gaming, but I think they're going to be necessary for us to move into that Hollywood model."

What do you think? Are you part of a union? Let us know in the forums. 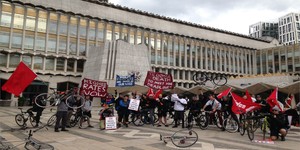 The third title in Ron Gilbert's Deathspank series, The Baconing, has arrived.

Deathspank coming to PC and Mac

Ron Gilbert's Deathspank is finally coming to PC and Mac.