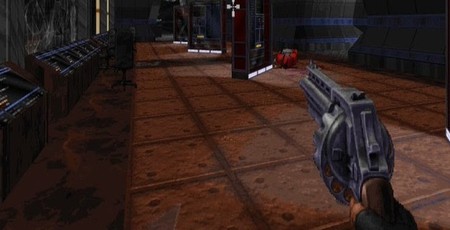 Game development pioneer 3D Realms has announced it is bringing back its Build Engine, first publicly seen in 1995's first-person slash-'em-up Witchaven, and is looking for play-testers.

Founded as Apogee Software in 1987 3D Realms was an active participant in the shareware scene, a method of software distribution pre-dating high-speed internet connectivity in which individuals and businesses were encouraged to create copies of games for low-cost distribution which could then be registered for a fee with 3D Realms itself - typically via phone, fax, or mail order - to unlock additional content. The 3D Realms sub-brand came about in 1994 to push the shiny new three-dimensional features of the game Terminal Velocity, and as Apogee began to concentrate more on 3D titles and less on the two-dimensional platformers and bullet-hell shooters for which it had previously been known the sub-brand became the company's official name.

From 1995 onwards many of 3D Realm's games were built around the Build Engine, starting with Witchaven in 1995 - the Build Engine had been used for a previous title, Legend of the Seven Paladins, by its creator Ken Silverman a year earlier, but the title was not publicly released - and most famously hitting its stride in first-person shooter Duke Nukem 3D, based on a character originally developed for sideways-scrolling platform-shooters. The code base for Duke Nukem 3D, released in 1996, would find its way into a range of games through to World War II GI in 1999, and in June 2000 Silverman released the full source code to the engine.

Now, 17 years on, 3D Realms has announced it is working on a new game based around the Build Engine - and it's seeking play testers. Described as 'a brand new game built by an amazing crew', little is known about the title beyond its use of the Build Engine. The company has stated it will choose around 50 testers for the game based on applications through a short form, and that those chosen will have to sign a non-disclosure agreement.