New Aliens versus Predator confirmed for 2010

Sega has confirmed that a new Aliens versus Predator game is in development and that fans of the series and alien/horror genre can look forward to playing the game in early 2010 if development continues to go well.

The new Aliens versus Predator will be developed by the same team behind the original AVP game, Rebellion Software, and is one of three Alien-based games that Sega currently has in development - the others being Obsidian's untitled RPG and Gearbox's Aliens: Colonial Marines.

Matching the previous Aliens versus Predator games, there'll be three different campaigns for players to get stuck into; one for the Predator, Alien and Marine factions, with each having a different mood and gameplay mechanic but all tied around a central story. While the aliens will be fast, mobile and stealthy, the predators will be totally invisible and very powerful but limited in ammo. The marines on the other hand...well, they don't stand much of a chance anyway.

The setting for the new game will apparently be one similar to the first Aliens versus Predator film - that is, a huge and ancient pyramid unearthed by colonist miners that all factions have an interest in. There'll also be a selection of online modes for players to get stuck into should they so desire, but the Sega is keeping the specifics quite hush-hush.

What we do know for sure however is that the game is still very much in the early stages of development (as you can tell by this mostly content-less preview trailer) and, although Sega has confirmed the title exists and given a vague release date, the publisher still refers to the game as being very much a working title.

Playing as the humans in the original Aliens versus Predator was one of the scariest game experiences we've ever had, but if you think you can think of something scarier (or if you just want to mouth-off about how excited you are) then let us know in the forums. 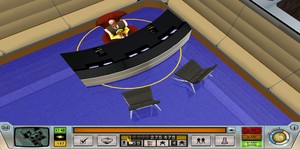 Rebellion's new game in the AVP series promises to bring the original games, which were among the most terrifying creations ever, up to date and to a new audience. Have the successfully captured the feel of the original and will we even live long enough to find out? Sega has announced that it has won an appeal for release of AVP in Australia.