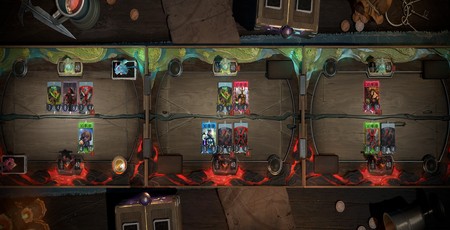 Valve has confirmed a leaked report that the beta programme for its upcoming game Artifact will be delayed into November, given eagers players just nine days to try the game out before it launches - a period not long enough to suggest that feedback from the beta will have any impact on the game at launch.

First teased during The International 2017 tournament, Artifact is an increasingly-rare first-party game from Half-Life creator Valve. It's not quite Half-Life 3, though: Taking its inspiration from Dota 2, Artifact is a digital collectable card game in which players build decks through Valve's Steam Marketplace system and compete in one-on-one battles based on the multiplayer online battle arena (MOBA) format.

In development since 2014, Artifact was originally scheduled to launch an open beta some time this month. Late last week, though, an internal tester leaked the news that the beta programme would be delayed into November - a leak since confirmed by Valve in emails to those who had registered for notifications and in a modification to the game's placeholder page, which now offers a beta launch date of November 19th.

The delay means the beta programme will run for just nine days before the game is officially launched on November 28th, and while that period will be enough to give those eager to see what Valve has created a taste of the game the timing suggests little of the feedback gathered during the beta will be reflected in the game itself at launch - though, of course, changes can and likely will be made to the game post-release.

More information on Artifact is available on the Steam store, ahead of its November 28th launch on Windows, macOS, and Linux PCs.