Hello Games has broken its eight-month-long silence and announced a major update to its critically-savaged explore-'em-up No Man's Sky, dubbed the Foundation Update in memory of author Isaac Asimov.

Produced by Hello Games and heavily promoted by launch partner Sony, No Man's Sky promised much: an expansive universe in which the user could go anywhere and do anything, journeying to realistically simulated, procedurally generated worlds hovering in a traversable sky where simply pointing your customisable spacecraft at one of the points of light and firing up the engines was enough to reach it. Sadly, and in common with Hello Games' fellow Guildford denizen Peter Molyneux, company co-founder Sean Murray's reach turned out to far exceed his grasp: features promised and demonstrated in pre-release footage and 'demos' turned out to be non-existent, from the ability to meet other players to the 'real' sky - a painted-on two-dimensional skybox to which the player can never get any closer not matter how long the engines burn. Demands for refunds followed, and both Hello Games and Sean Murray took a vow of silence bar release notes for the occasional bug-fix patch.

Now, though, the company has broken that silence for more than a simple bug fix. The Foundation Update, uploaded this weekend, represents the biggest change to the game since its release - but may not be enough to win over the critics and back the players it has haemorrhaged since its inauspicious launch. The Foundation Update brings with it the ability to choose between the original game mode along with Creative and Survival modes, the former adding a base-building feature and the latter 'creating a much more challenging endurance experience.'

The base-building feature includes the ability to teleport to and from a player's bases, create farms to harvest resources, and to create smaller camps while exploring - including devices which automatically harvest resources. While the promised ability to find and interact with other players is still very much absent, the update also includes 'Communications Terminals,' on which messages can be left for other players to find. The Foundation Update also brings with it player-ownable freighters, giant ships which can stockpile huge amounts of resources for trading, and improvements to the user interface including the ability to stack materials.

Hello Games has described the Foundation Update as 'the first of many free updates,' as well as claiming it to be 'a foundation of things to come.' Full release notes can be found on the official website. 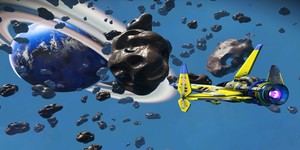 No Man's Sky servers wiped ahead of launch