Perhaps Sports Interactive had already coded Fabregas’ homecoming into the game and was just waiting for the Spaniard to finally sign, but this season’s Football Manager was announce today soon after the prodigal son returned to Camp Nou.

‘Planned to be in stores before Christmas’ the new season, the new game is said to feature over 9,000 800 new features, plus the new rule-changes for the 50-odd leagues it contains. We expect to see players sent off for swearing at Premiership refs, for example, and so surely will see similar incidents in FM12.

‘It’s another year of evolution, with some revolution thrown in for good measure’ said Miles Jacobson, studio director at Sports Interactive,’so we’re pretty sure our dedicated communities, and hopefully lots of new people too, get to play and enjoy the game when it’s released later in the year.’

There are seven ‘key new and improved areas’ in FM12, according to Sports Interactive and its publisher Sega. Let’s list them for brevity’s sake:

Transfer and contracts will benefit from an ‘improved transfer centre’ and the ability to lock clauses in contracts; some of the these clauses can now be loyalty bonuses. There’s also said to be better youth and part-time contract handling.

Scouting reports are all-new in FM12, and include ‘squad analysis, tactics information and information about goals scored and conceded alongside lots of other scouting improvements.’

The 3D match engine has new animations and a new crowd system, more stadia, improved weather and two new camera angles. You can also reverse all the camera angles, so you can subvert the game in Match of the Day Broadcast Editor 2012 if you so desire.

Manage Anywhere, Anytime is what Sports Interactive is calling the ability to add and remove playable leagues to and from your saved game at any time. This is a great improvement, as previously you were stuck with your original selection, which could either become boring because irrelevant games had to be calculated or restrictive because you fancied a change of location.

The Tone is said to introduce ‘a whole new level’ to team talks and conversations by allowing you to state the tone of the response or statement. There are six different tones to pick from, so you can either present yourself as serenity itself or a raving nut-job. It’s yet to be seen whether a Roy Keane-like menacing glare is an option.

The Intelligent Interface is an adaptive layout system, meaning the high-res screens can show more information but in an intuitive way. There are also new filters, customisable columnns and so on.

Beginners should hopefully appreciate the new tutorial as an easy way into the game, while experienced managers that have maybe been on holiday for a few seasons (Keegan, Hoddle, Hughes etc. we’re guessing) might pick up some tips too. There’s also a new ‘how to’ feature in the game itself.

There are other areas that have been improved too, from the media system to new-gens to international management. But enough of that, let’s see a couple of videos before letting us know what you think of the details in the forum. 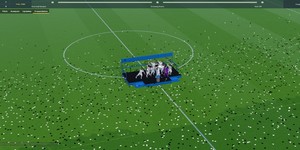