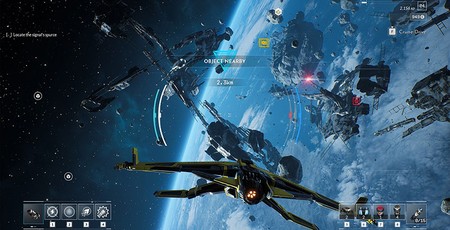 Everspace 2 developer, Rockfish, raised nearly US$620,000 in a successful crowdfunding campaign back in late 2019 but left some folk with 'backer's remorse' by delaying the game's release to Early Access twice in 2020.

The excuses for the Early Access release delays were very 2020 and reasonable on the surface: firstly the impact of the pandemic and lockdown(s) slowed game development progress; and secondly, once the developer's felt comfortable with a preliminary release, Cyberpunk 2077 eventually trotted out to grab everyone's attention for good and bad. Rockfish has now committed to releasing Everspace 2 to Early Access customers on both GOG and Steam from 18th January. It says that the initial release will be good for "at least 25 hours of gameplay" in its open world space shooter universe. The core gameplay mechanics are in place, however at present there is just 12 hours worth of voice acting in the (English language) campaign and side missions – hopefully the subtitles will be sufficient in non-voiced segments.

Other completed highlights include; two star systems, four to six player ship classes, and more. As well as completing the missing pieces, Rockfish promises approx twice as much story content and "lots of worthwhile endgame activities" to keep you at it after completing the story missions.

Currently the plan is to keep the game in Early Access for 12 to 18 months. Early Access customers will be able to snag Everspace 2 for $40/£32/€38 but upon its graduation to a fully fledged title Rockfish is touting a "reasonably increased" price. It sounds like it will be worth following the user reviews for a bit if you like this style of game. There is a free demo available too (7.5GB) if you want to give it a test run.