Digital Extremes, the company behind The Darkness II and the multiplayer side of Bioshock 2, has announced an upcoming free-to-play sci-fi shooter.

Set in a far-flung galaxy in a second dark age, Warframe - for that is the name of the game - introduces the Tenno, a race pushed to the brink of extinction by their slaver captors the Grineer. Daft names aside, the story sets the backdrop for the players' struggle: the game is set when, on the eve of the Grineer's overall victory, the Tenno fight back with the titular Warframes - ancient exoskeleton battle machines only the Tenno can operate.

Alternately described as a fast-action player-versus-environment (PvE) co-operative shooter or an 'MMO-lite,' the game will see squads of four players band together to take the fight to the Grineer. Earning experience through continued play, gamers will be able to increase the power and abilities of their Warframe chassis and attached weapons by carrying out raids on new areas of space in the search for new weapon and augmentation drops. An automatic mission generator creates new gaming content on the fly using a procedural generation algorithm, which Digital Extremes claims means a new raid every single time.

The central game concept isn't new, the company explains. 'Warframe is a new name for an old game,' Steve Sinclair, chief creative director at Digital Extremes, explained at the game's announcement. 'It was a shelved concept we kept coming back to. High-tech machine-gun ninjas set in a far-future, over-hyphenated, Manga-Dune mash-up. Free-to-play lets us take risks. It allows us to build Warframe with our players.'

That free-to-play mechanic means that Warframe will be completely cost-free for players, including unlimited game play, no level caps, and access to all the same weapons and upgrades as anybody else. Digital Extremes is hoping to generate revenue through an in-game marketplace - echoing the real cash for virtual items economy of the recently-launched action-RPG Diablo III - where players can trade in-game items.

'We've heard for years now that PC gaming is dead. It isn't dead - it just went underground for a few years and is now re-emerging with this massively growing free-to-play market that has matured to the point where the quality of games we're seeing rivals many AAA retail games,' claimed James Schmalz, Digital Extremes's chief executive, at the announcement. 'In many ways, we're going back to our PC action-based roots. Free-to-play is like shareware 2.0. Once again, we're connected directly to our end-user. They decide whether or not to pay for their experience and we listen to their feedback and continually improve the experience to make it worth paying for. Game development as it should be.'

Registration for Warframe is open now on the official website, although the game itself won't be available until later this year with a pre-launch beta due in the autumn. To whet your appetite - and help you decide if it's worth pre-registering and getting the exclusive free bonus weapon on offer - take a look at the first official trailer below. 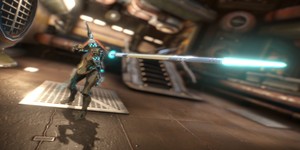