Bioware has announced several new story details for upcoming space-based RPG, Mass Effect 3 - the biggest reveal of which includes which characters are confirmed to rear their heads in the final act of the trilogy.

A new character, James Sanders, has also been revealed - and is notable for sharing a surname with the protaganist of the Mass Effect novels, Kahlee Sanders.

Story-wise, Mass Effect 3 will open with Shepard on trial for his actions in the new Mass Effect 2 DLC, The Arrival. Half way through the hearing the Reapers will apparently move to invade Earth, giving Shepard an opening to escape and steal the Normandy. Much of the game will then focus on Shepard's efforts to reunite his team and gain an advantage against the Reapers.

Shepard's mission will be complicated by the re-emergence of The Illusive Man, however - who has now tasked Cerebus with assassinating Shepard as soon as possible. Quite why he's turned against his former ally hasn't been explained yet.

Bioware has confirmed that, like previous games in the series, Mass Effect 3 will not feature any multiplayer - though the team is considering a possible Mass Effect MMO for the future.

Check out the Mass Effect 3 trailer below, then let us know your thoughts in the forums. 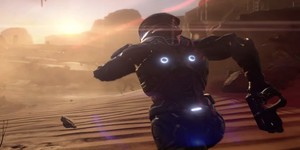 BioWare co-founder Ray Muzyka has claimed his company is listening to feedback on the ending to Mass Effect 3.

Copies of Mass Effect 3 are being sent into space in a clever marketing push by Electronic Arts.