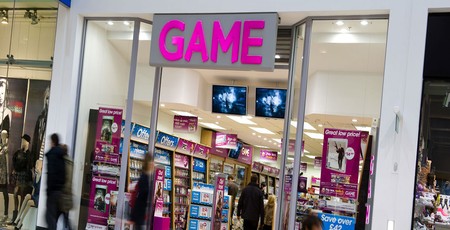 Game Digital, the company behind the eponymous high-street video games outlet brand and its online incarnation, has announced a £10 million loss for its last financial year, blaming a 'challenging market'.

In its latest financial report, Game Digital warned of a 2.4 percent slip in its gross transaction value (GTV) due to sales of 'lower margin hardware' like games consoles, which combined with a halving of its core retail earnings from £28.7 million in 2016 to £14 million this year to drive the losses. While Game's management has blamed 'a weaker line up of new game launches compared with the prior year and under-performance of a key new release', the company's investments in events, esports, and digital projects hold the lion's share of the drop: The group lost £6 million on such projects in its latest financial year, down from £3.1 million last year, though it is quick to claim this as 'investments [...] to support significant planned future growth' rather than an outright loss.

'Though our markets remained volatile last year, we made solid strategic progress as we continued to focus on those elements within our control; delivering on each of the four pillars of our strategy and creating a new cost base for our UK retail business,' claims Martyn Gibbs, Game's chief executive, of the results. 'After two years of declines, our core UK console market returned to growth in the second half of our financial year on the back of the launch of the Nintendo Switch. This growth has continued into our new financial year in both of our key territories. Whilst we remain mindful of the structural headwinds that remain in our core markets, we expect recent positive market dynamics to continue into our peak Christmas trading period, driven by strong growth in all elements of the PlayStation 4 category, continued customer demand for the Nintendo Switch, the launch of Microsoft's Xbox One X and continued stronger demand for related software.'

Game Digital has had a troubled financial time since 2011 when lower than expected sales led to its suspension from the stock market and the closure of hundreds of its stores during an administration process which saw the company change from Game Group through Game Retail to its current moniker of Game Digital following a £1 buy-out offer. A 5.4 percent drop in revenue in 2015 saw the company's share price drop by a third, though its admission of a £10 million loss for its latest financial year has seen only a 3.9 percent slip - likely due to the expected impact of investment from Sports Direct owner Mike Ashley, who acquired a 26 percent stake in the company in July this year, which will only be reflected in its future financial filings.

A deal valued at just £1 has saved GAME Group from the financial wrecker's yard.