A Brief Note on Fittings

This is intended just as an addendum to the topic of rigid tubing. We will be running a full fittings article later on. Since I've been asked a few times, though, I just wanted to show briefly a couple of fitting styles available on the market and how they work - handy if perhaps you haven't worked with rigid tubing before.

Here we have a selection of three rigid compression fittings that have been disassembled so that you can see the component parts. On the left is a 'Chrome Thermaltake M-Pro' 16mm Rigid Compression, centre is a 'Deluxe White Bitspower Enhance Multi Link' 16mm Compression and right is an 'Alphacool Eiszapfen' 13mm Compression fitted with a Blue 'HardTube union nut'.

These fittings all work on the same principle: They compress O-rings around the outside of a piece of tubing, creating a tight seal. This is in contrast to a soft-tubing compression fitting that compresses the tube itself around a barb using the collar to make the seal. However, there is a key difference between the two on the right and the one on the left in how they accomplish that. This method is pretty tried and tested. The big differences you'll find are the depth of the socket containing internal o-rings and the size of the collar. Some fittings will have two O-rings and others three (two in the housing and one under the collar). The downside is that you can't insert tubes between parts that are locked in place. A good example of this is putting tubes between two graphics cards once they're installed into the motherboard. Those cards don't have much wiggle room; you would have to lever the tubes into place. Realistically you would install the tubes before adding the GPUs, likewise for other parts you install the tubes into the fittings and instead tighten the fittings into the components after.

This also means when planning the loop and working out tubing lengths, you need to take this housing socket depth into account. Alphacool offers a little device for helping with this that you pop onto the end of the tube to simulate the socket depth, and other manufacturers offer scale drawings that can help with this. Alternatively, if you have a par of calipers you can simply measure for yourself.

Moving onto the Thermaltake M-Pro, we have a similar concept but a different execution. Like with the Bitspower, you slide the compression collar onto the tube, followed by the O-ring. However, we now have an additional collar to add. This extra collar contains an O-ring (two in the newer fitting revision) that plays the same role as the housing in other fittings. The base of the fitting (that you screw into the component) instead has an O-ring inside, which later fits tight against the base of the collar when the fitting is assembled.

The interesting thing about this solution is that it's designed for installing tubes between objects, since there isn't a socket that you have to insert a tube into. So, to use our GPU example from earlier, you could screw the bases of the fittings into the blocks, measure the gap and prepare your tube, then simply slide in from the side. I've found this particularly useful in scenarios where you don't have much flexibility, such as connecting two distribution plates that are perpendicular to one another. It's also good for tubes that lack flexibility, such as metal and glass. The compression collar not only squeezes the O-ring against the tube, but it also pushes the internal collar against the base, keeping the whole thing watertight.

The cost is that the fittings themselves are large, and the collar takes up a fair bit of space, so the fittings are bulkier than some other designs. This is more personal preference, though, as some like that look regardless. 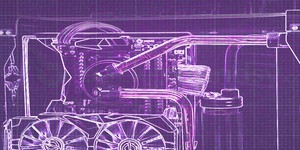 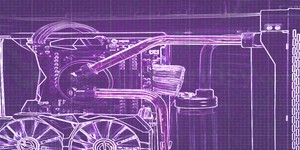 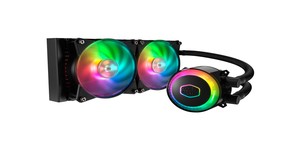