Mod Unlimited: What Exactly Is It? 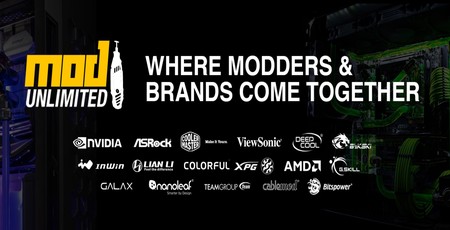 Without a doubt, the modding scene has evolved a lot in recent years. As certain aspects of the hobby have grown, industry support has grown alongside it. You need only have a look down the list of industry-sponsored contests, such as our recent TT 2018 UK Modding Trophy, or have a glance through footage from events like Computex and EGX to see how modding has become an integral part of component advertising.

Additionally, product sponsorship in general has become much more commonplace. If you browse some of the older logs we have here in our Project Logs forum, you'll no doubt notice that whilst sponsorship was very much present, it was less ubiquitous and often for smaller items. Obtaining sponsorship, however, is still not an easy feat, not least for many of the most heavily requested items such as CPUs and GPUs. This is where the Mod Unlimited initiative hopes to lend a helping hand.

Originally set up by Cooler Master but now involving a plethora of brands, Mod Unlimited is intended as a way of directly supporting the modding scene by offering the parts for an entire system to a given modding proposal. It's been up and running for a couple of months now, with the first supported project having been chosen in November 2018.

The premise is a simple one. You submit a proposal to Mod Unlimited, consisting of whichever media you're able to provide (be it a worklog, renders, sketches, etc.) alongside your social media handles. In the proposal you should mention which parts you're looking to use in the project, as this will help dictate which potential sponsors are likely to be involved. The projects are then collected together and evaluated, with the top project being submitted to the hardware sponsors for appraisal. If you're successful, you'll receive the industry support for the project, at which point it's up to you to complete and document it. If for whatever reason you don't succeed, fear not, as the project could still be eligible for future months.

The concept is most definitely an interesting one, not least because it aims to deliver a whole package rather than the piecemeal approach one would normally have to take when approaching potential sponsors. It's still early days, so there's a lot to be seen, but if the initiative proves fruitful then it could be a great way of enabling some very special projects and potentially paving the way for a more collaborative sponsorship approach.

It's certainly curious to see that Cooler Master has managed to include a number of companies who compete against one another in their given market segments, such as water-cooling components from Bitspower and Bykski, along with of course AMD and Nvidia both having a presence. As many companies have been increasing their product stacks recently, trying to piece a build together without competing brands can be a real challenge. It's refreshing to see an approach that pulls brands under one roof, so now the question will be, will it catch on?

Our forums are packed with great mods and occasionally you see some with big name sponsors. It ends up being the biggest question - "How do I get my mod sponsored?" We take some time to explain what catches the attention of both ourselves and corporate sponsors.