The 10 Best Weapons in Gaming 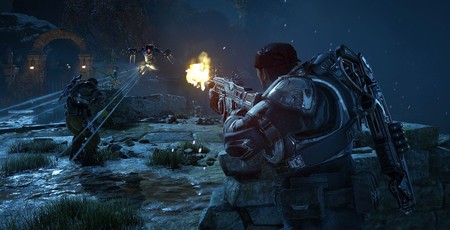 Video games love a good weapon. After jumping, fighting is probably the most common way we interact with games. Consequently, the industry has dedicated an enormous amount of time into designing virtual killing machines, both realistic and fantastical. What this says about humanity I don’t know, although to be fair, it’s not like we worry that all those platformers are going to trigger an epidemic of jumping onto people’s heads, is it?

But which are the best weapons that gaming’s virtual arms race has ever produced? The most powerful guns, the sharpest blades, the biggest bombs? There are thousands to choose from, so picking just ten is quite the challenge. Hence, we’ve decided to focus on the most satisfying weapons to use, rather than necessarily the most well-known or iconic (although plenty of those make the list too). If your favourite hasn’t made the cut, let us know in the comments. As a firearm, Gears of War’s Lancer isn’t all that special. Sure, it has a decent combination fire-rate and damage, drilling down enemy health bars in effective fashion. But even when compared to Gears of War’s other weapons, it lacks the raw punch of the shotgun, or the apocalyptic spectacle of the Hammer of Dawn.

What elevates the Lancer above those weapons is, of course, the chainsaw bayonet. Revving up the chainsaw and charging at the nearest Locust, carving them up into lizard sushi, is phenomenally satisfying. The bayonet adds both spectacle and versatility to the Lancer’s play, transforming a relatively standard assault rifle into a distinctive and ferocious weapon. While I’m sure many people prefer Kratos’ traditional chaos blades, I have to be honest and say I think the Leviathan Axe is better. It’s weightier, it’s more purposeful, and there’s considerably less flailing involved to when fighting an enemy.

The reason it makes this list, however, is because the entire moveset of the Leviathan Axe is superbly designed. There’s the way Kratos winds up heavy attack, before ploughing the blade into the shoulder of whatever poor Draugr is in his path. There are the spectacular “Runic Attacks”, such as the River of Knives, where Kratos sweeps the blade across the ground, creating a line of ice spikes that stab at enemy legs. Even the way Kratos recalls the axe after throwing it feels gratifying to perform, the way the axe haft thunks into his palm cleverly conveying its weight and texture.

Despite being your only weapon for most of the game, the Leviathan Axe never becomes tiresome to use, which is a testament to the depth and nuance of God of War’s combat design, and makes the axe more than worthy of a place on this list. The Worms series has provided some of the most delightfully daft weapons ever to grace a computer screen. From the ridiculous exploding sheep to the Python-esque holy hand grenade, right down to the simple, yet delightfully evil prod, the eclectic arsenal of worms could easily occupy several spaces on this list.

The reason I opted for the banana bomb, however, is because of its sheer destructive potential. The banana bomb is a cluster grenade, with its initial detonation scattering multiple additional bananas into the air. Each of these is about ten times more powerful than a standard Worms' grenade. A well-placed banana bomb can annihilate half the worms on any given map, and radically alter the layout of the terrain. Ultimately, it epitomises the still-unique gameplay of Worms - ludicrous, hilarious, and deadly. A good indicator of a virtual weapon’s quality is that you can play the entire game with it and never get bored. This is certainly the case for Dead Space’s plasma cutter, a weapon so good at its job that it almost renders the rest of the game’s arsenal redundant.

What’s particularly ironic is that, lore-wise, the plasma cutter isn’t a weapon at all. Instead it’s a mining tool designed for cutting through softer types of rock. Fortunately, the width of its beam and adjustable barrel make it perfectly suited for slicing the limbs off Dead Space’s terrifying Necromorphs.

The real genius of the plasma cutter, however, is how it’ design adds to the tension of Dead Space while also remaining a practical weapon. That ability to alter the angle of the cut is helpful for lining up the correct shot, but it also adds another step to the task of killing a Necromorph. Given how they flail their limbs all over the place, it’s difficult to place shots accurately, and it may take several attempts to line up the plasma cutter in the optimal way. It’s an intriguing counterpoint to the tank controls of early Resident Evil games, generating tension through mechanics and controls, but in a way that feels like a help rather than a hindrance. It might seem odd to hand a place on this list to a glorified shoe, but when the footwear in question is worn by the protagonist of Dark Messiah: Might and Magic, it becomes a weapon of truly formidable power.

Dark Messiah is basically an Errol Flynn simulator, a swashbuckling fantasy adventure where the world is designed like an action-movie set. Enemies love to hang around beneath dangling crates or beside precipitous drops. Rickety rope bridges are built specifically to collapse, and the walls are lined with deadly spikes that are just aching to give the nearest orc a big, sharp cuddle.

More often than not, you boot is the trigger that sets off these Looney Tunes-style traps. Heft your hobnailed sole into the chest of an orc, and you can punt them down a flight of stairs, send them tumbling into a stack of barrels, launch them off a cliff, or impale them upon spikes. Kick out the supports from a shelf, and you can topple a stack of barrels and crates onto unsuspecting guards.

Not only is this environmental play fun and engaging, it’s also hilarious. Dark Messiah is notionally a serious game, but it has some of the best dynamic slapstick in the whole of the medium. The game plays up to it as well, with enemies uttering over-the-top screams as they plummet off cliffs or crunch into the ground. It may not be very glamorous, but Dark Messiah’s boot makes the game.