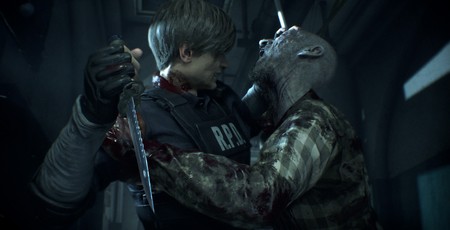 The 10 Best horror games of the last ten years.

Horror games have changed considerably in the last decade. Back in the nineties and even into the 2000s, most horror games fell under the umbrella genre “survival horror”, pioneered by games like Alone in the Dark, Resident Evil and Silent Hill. But 2010’s Amnesia: The Dark Descent saw a shift away from horror games that emphasised combat, toward experiences driven more by narrative, puzzling and atmosphere.

Amnesia has spawned many imitators, even seeping into the mainstream. At the same time, many other genres have dipped their toe into the murkier waters of horror. We’ve seen multiplayer horror games, horror-survival games (yes, this is different from survival-horror), and even horror-based strategy games.

In this article, I want to celebrate the best examples of these innovations over the last ten years, and demonstrate how far horror gaming has come since those formative years in the 1990s. Close the curtains, dim the lights, and make sure there’s a cushion to hug on standby. We’re headed into spooky town. Population, you. Layers of Fear is a good old-fashioned ghost train designed for the Youtube generation. Placing you in the role of a tortured artist on a dark and stormy night, it sees you exploring your own house as it warps and changes in reflection your character’s crumbling sanity.

It’s this gimmick that makes Layers of Fear worth playing. The game constantly reshuffles corridors behind your back. You’ll walk into the bedroom, turn around and suddenly the door won’t be there. Then you’ll whirl about again and the bookshelves will have turned into a big wall of blood or something. It’s effective at making you feel disoriented and unsettled, and the developers seem to have a trick up their sleeve for every other step the player takes.

Layers of Fear isn’t a subtle horror, and beyond its environment-switching mechanic there isn’t much depth to it. The writing and voice acting are both a little shaky, and not all of the scares are effective. But despite these flaws, its clever use of level makes it one of the more unique horror games currently around. 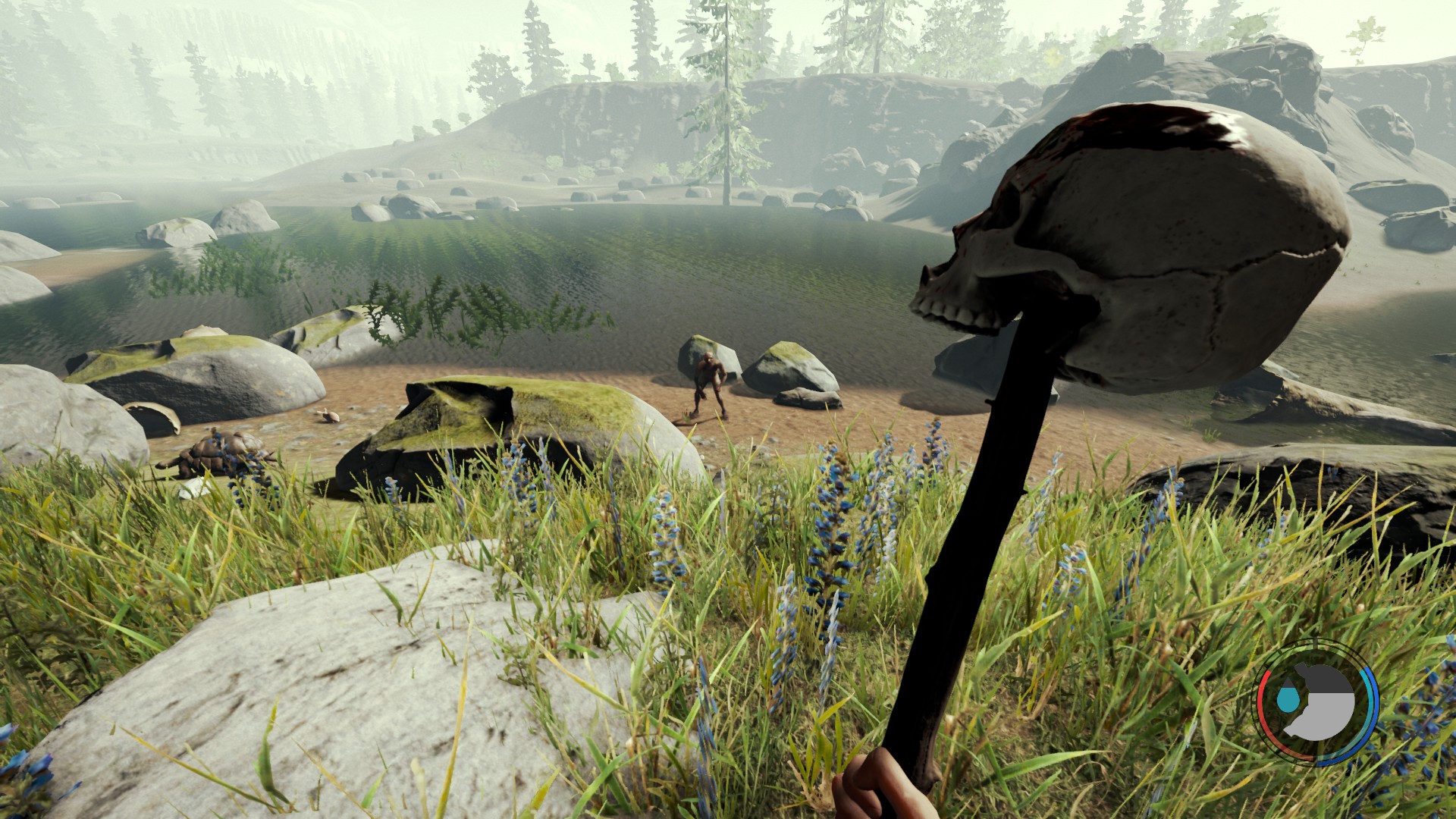 You may remember the Forest from our list of the best survival games, but I’m adding it here too because it is genuinely one of the scariest games I’ve played in the last ten years. It starts out as a standard survive ‘em up, with you playing the survivor of a plane crash attempting to scavenge food, build shelters, all the usual survival stuff. Then your camp starts to be visited by members of a forest tribe. At first they’re appear timid and standoffish, but soon they become bolder, and eventually things begin to get nasty.

From here, the Forest gets nastier, and nastier, and nastier, as you simultaneously try to keep the tribe at bay, while also searching for your missing son. When you stumble on the tribe’s camp, decorated with the remnants of your fellow plane passengers, that’s disturbing enough. But soon you discover a huge network of underground cave systems, and it’s here where The Forest makes The Descent look like Alice in Wonderland. The only reason it isn’t higher on this list is that it’s not strictly speaking a horror game. But it’ll still get under your skin more efficiently than a hungry cannibal Speaking of survival games, I completely forgot to add Pathologic 2 to our list of stay-alive ‘em ups. Fortunately, it’s also a damn fine horror game, so I’m adding it here as a way of making up.

Pathologic 2 gives you the goal of trying to survive twelve days in a town afflicted by a terrible disease (an unfortunate subject matter given current events). The disease has also had a cascade effect on town’s social structure. Basic supplies like food and medicine are extremely short, and the town’s atmosphere is rife with paranoia primed to explode into violence at the slightest spark.

Much of Pathologic 2’s horror stems from its brutal difficult and the things you have to do to survive, whether it’s selling sharp objects to local street gangs, or extracting organs from corpses and selling them in exchange for food. The atmosphere of the game is also palpably eerie, filled with strange character and macabre concepts. It isn’t a game that gives away its rewards lightly, but if you want a horror experience that stands out from the usual crowd, Pathologic 2 certainly does that. Thumper is not officially a horror game, but I challenge you to find something that’s as viscerally frightening as bombing along one its black-chrome rails while it bellows its aural nightmare in your ears. It’s a rhythm-action game in the vein of something like Rez, but with music and beats seemingly sampled from the deepest bowels of hell. Without uttering a single word, it manages to be one of the most thrilling and unsettling games I’ve ever played. It couldn’t be more of a horror game if it leapt out of the screen and strangled you. Dead By Daylight’s premise is simple enough. Four players assume the role of survivors trapped on a randomly generated map, while a fifth player assumes the role of a killer. The four survivors must try to escape the map, switching on generators to open a gate through a mixture of stealth, evasion and, if they’re able to, teamwork. The killer’s role is to catch the survivors, and impale them on one of several sacrificial spikes. If this happens, the other survivors have a limited time to rescue the afflicted companion, before they’re turned into a giant human kebab.

It’s a simple premise lent complexity by the many variations in survivor/killer abilities. Indeed, Dead By Daylight has received a ton of extra content, which lets you play as killers ranging from Michael Myers to Leatherface. Played online it’s good, but played with friends it’s brilliant. So if you fancy a scream and a giggle this Hallowe’en, give Dead By Daylight a shot. Duskers is one of the most underrated games to come out in the last decade. You play as the last human in the universe, who travels between an infinite graveyard of wrecked spaceships scavenging what you need to survive. These ships are far too dangerous for you to enter yourself, however, so instead you explore them remotely using pilotable drones.

Duskers has so many awesome things going for it, from its stunning retro-futurist visuals, to how you control the drones via a command-line interface. But it’s atmosphere of uncertainty that makes Duskers so wonderfully scary. For example, you can scan spaceships you explore for signs of life, but sometimes the scan will come back “inconclusive” for specific rooms on the ship. The only way to find out what’s inside is to send in a drone. The room could be empty. It could even be full of goodies. Or it could be home to some horrible alien that’s about to turn your drone into metal spaghetti.

Add to this fantastic premise a whole bunch of other variables, like the fact that ships can start to break apart around you, and that your drones’ camera feeds can randomly shut off, making you think that it’s destroyed when it’s actually fine, and you’ve got one of the most inventive sci-fi horror games around. If you like sci-fi horror, you should definitely give Duskers a try. It’s unlike anything else you’ve played. Outlast doesn’t have the most original horror concept, putting you in the shoes of a journalist investigating mysterious goings on at an abandoned insane asylum. But it makes up for its lack of originality by being mechanically clever and scarier than a scorpion in your underpants.

The lynchpin of Outlast’s horror is its video camera, which acts as a torch via its night-vision mode, and a hints system whereby filming something interesting will cause the protagonist to write down his thoughts about it. But the camera also forces you to literally face your fears, as you can only see what’s going on and learn about things by confronting it directly.

Mainly though, Outlast is just a superbly crafted horror. The scares are elegantly choreographed, the story is interesting and (mostly) well written, and there’s a great balance between scripted scenes and more dynamic evasion sequences, where you need to hide under beds and in cupboards to evade an enemy. The sequel may have been rubbish, but that’s not to take away from chilling brilliance of the original. One of the best remakes ever re-made, Resident Evil 2 fundamentally overhauls the visuals and mechanics of the classic survival horror, while maintaining the spirit of the 1998 original. Playing as either Clare Redfield or Leon Kennedy (both of whom have very different experiences in the story) you need to stay alive in zombie infested Racoon City, investigating mysterious goings on in the game’s iconic police station and beyond.

There’s loads to recommend about Resi 2, but one of its greatest achievements is to make slow zombies scary again. The game’s shuffling undead might be clumsy and cumbersome, but they’re also relentless and unpredictable. They eat bullets like biscuits, constantly threatening to collapse but somehow remaining upright. Even when they finally drop to the ground, there’s no guarantee they’re actually dead.

Meanwhile, after the wonderfully slow-burning first chapter, the second act brilliantly mixes things up, introducing an enemy that forces you to run where you would have walked, to flee when you would have fought. It’s a superb mid-act twists that cements the game as the best Resident Evil since 4. Frictional Games’ Amnesia: The Dark Descent may be one of the most influential horror games ever made, but it’s the follow-up, SOMA, that is the studio’s true masterpiece. SOMA takes place in an underwater research laboratory known as Pathos II. As you can probably guess, something has gone terribly wrong at the station, at it’s your job to find out what (and hopefully fix it).

But who exactly are you? That’s the question that SOMA poses, and one it explores in a nuanced and superbly told horror story. SOMA by and large evades more overt horror, instead slowly building a sense of existential dread.

SOMA is a difficult game to write about without spoiling it. But it’s so good at what it does that the more traditional horror elements – the bits where you’re chased by a monster – feel oddly out of place. This is one of the game’s few flaws, but it’s also a testament to strength of SOMA’s narrative and environmental design. If you haven’t played it yet, you absolutely should. Six years after its release, Alien: Isolation is still unmatched for its superbly told story, its mechanical ingenuity, and its sheer, pants-shredding terror. It takes some talent to make one the most iconic monsters in popular culture frightening again, but The Creative Assembly achieve it with their stomping, hissing, and apparently thinking Xenomorph.

In many ways Isolation owes a debt to Frictional Games, but where Amnesia’s monsters were largely scripted entities, Alien’s Xenomorph is an entirely dynamic beast. Make too much noise and it’ll drop down from the ceiling vents looking for you, searching rooms with the cunning and patience of a true Apex predator. Its presence is also fully simulated, even able to climb into the vents that you so regularly use to hide. I didn’t discover this until after I’d finished the game, and the knowledge genuinely freaked me out. Any game that manages to scare you retroactively has got to be something special.