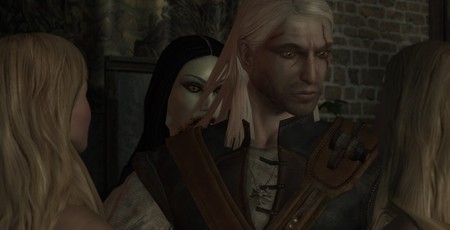 For this final entry in my return to The Witcher, we’re going to explore some of its more controversial elements. Sex and romance have always been core themes of the Witcher, something outsiders might be surprised to hear given its grimdark tone. Ultimately, Geralt’s quest to recover his memory is also one to find Yennefer, the love of his life whose soul his is bound to. Admittedly, in the first game there is somewhat more sex than romance, although this is more down to limitations of execution than intent. Yes, it’s time to discuss the Witcher’s infamous romance cards. Ever since the Witcher launched, its romance cards have been the no.1 object of derision about the game. It’s an entirely valid target for reasons I’ll go into shortly. But I also don’t think the idea of them was necessarily terrible, certainly not if you consider when the game was made.

To understand this, you need to cast your mind back to 2007, and recall what games looked like back them. The mid-2000s was peak uncanny valley territory for character models – recognisably human but also recognisably soulless, with mannequin skin, dead eyes, and animations that were at a transition point between inverse kinematics and real-life motion-capture. While games could feature interesting romantic relationships, few games dared to actually portray sexual encounters, and for good reason. Watching a pair of 2007-era videogame models copulate has all the inherent eroticism of a Barbie doll and a Ken doll being bashed together by a toddler. CD Projekt was obviously aware of this, and so opted for a different approach, why not draw some erotic art, and have the player receive it as a reward whenever Geralt enters a romantic entanglement? Not a bad idea for getting around the problem of real-time graphics being decidedly unattuned for portraying sex. The problem, of course, is in the execution. In the process of creating the romance cards, CD Projekt also created a system whereby its female characters are transformed into collectible objects, which is really problematic for all sorts of reasons. As always, the original game’s lumpy writing doesn’t help, sucking any potential romance out of Geralt’s encounters like a vampire with halitosis.

Over the course of the next two games, CD Projekt would become much better at handling romance, although there are some scenes in the original game that hint at that ability. Geralt having a sneaky dalliance with Princess Adda in the middle of a political function is one, as is his encounter with multiple “Ladies of the Night” in a whorehouse that’s also a refuge for vampires. I wouldn’t call them romantic, but they are fun, which is something The Witcher would better get to grips with in the Witcher 2 and particularly 3. Sex isn’t the only subject that the Witcher takes an awkward stab at. Although the romance cards are the go-to criticism of the Witcher, the main cited reasons for avoiding the first game is the combat, which is far simpler and less involved than the later two games.

Again, I’m going to flow against the tide on this one, I quite like the original Witcher’s combat system. It is fairly simple – you click on an enemy to attack, and then you need to click again at the right moment to flow into the next attack. Get the timing wrong, and you’ll leave yourself open to being attacked yourself. You also need to use the right combat style for the situation, and the right sword depending on whether you’re fighting humans or monsters. The system isn’t short of problems. Primarily, it isn’t very involved. Fighting nuisance enemies like drowners becomes particularly tedious around the game’s third act, and the most advanced moves aren’t unlocked until very near the end of the game. Also, fights tend to be very one-sided. Either Geralt will slice and dice enemies with little effort, or he’ll be dead within seconds.

That said, The Witcher’s combat system effectively conveys Geralt’s superior strength and agility borne unto him by his mutations. The group style is especially neat, with Geralt using wide, arcing swings and balletic movements that convincingly portray how he might keep multiple enemies at bay. I also like how you can use the Aard Sign to stun enemies for a quick and often brutal execution, the ground spattered by blood droplets as Geralt drives the point of his sword into an enemy’s chest, or leaps on their shoulders and decapitates them with one smooth motion. It’s nasty, and I like it. Compared to the Witcher 2’s combat, which has an intensely inverted difficulty curve and sees you spending far too much time rolling around on the floor, The Witcher better grasps what it means to be a Witcher. Of course, both pale in comparison to the Witcher 3’s system, which I think is an extremely enjoyable system that’s much underrated.

Next month we’ll move on to The Witcher 2, but I’ve thoroughly enjoyed returning to where everything started for CD Projekt. That said, I do want to make a couple of observations about regarding the later chapters of the game. •    Act IV offers undoubtedly the best-looking area for players to explore, an idyllic riverside village surrounded by lush grassland and golden wheatfields. It also finally sees Geralt catch up with Berengar, who is low-key the best character in the game. Berengar’s cynicism makes Geralt look like a happy-go-lucky optimist, and his dialogue is superbly voiced.

•    Act V, which takes place in the burned ruins of Old Vizima, is probably the weakest after the Outskirts. However, the Epilogue is amazingly ambitious, as you see all the choices you’ve made finally come together, and culminating with a battle against the Grand Master of the Order of the Flaming Rose inside his own mind. Oh, and the Grand Master is also the grown-up version of Alvin, the little boy Geralt tries to protect throughout the Witcher 3, who used his magical powers to teleport back in time, and misinterpreted Geralt’s faltering attempts at parenting to become the monster he is. It’s quite the denouement, and I think it’s this final act that really demonstrates the potential CD Projekt would realise in the next two games. The Witcher’s dialogue may be clunky, its questing often obscure, and its portrayal of women somewhat unfortunate, but it is still a better game than it is often given credit for, and now a hugely important slice of gaming history.