Neurocracy is a futuristic murder-mystery told via a fictional Wikipedia. 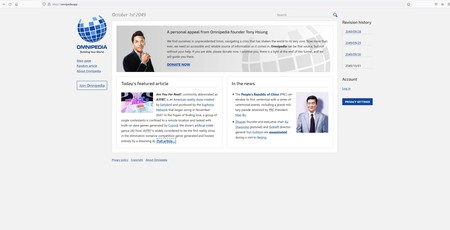 I feel a little sorry for Tony Hsiung, the Chinese Internet entrepreneur (born 2023). He’s just officially launched Omnipedia, the AI-enhanced, algorithmically-driven successor to Wikipedia (discontinued in 2048). Two days later, and one of the most visited articles on the site covers the assassination of one of Omnipedia’s chief investors, Xu Shaoyong (born 1997).

As if that wasn’t bad enough, the site has become the fulcrum for an unofficial investigation into Xu’s death, with new and updated articles related to the death slowly spreading through the nascent site. Now you’ve got idiots like me assuming the role of Internet sleuth, and all I wanted to do was read up on the latest goss about my favourite reality show Are you For Real?

Neurocracy is what you’d get if the Wikipedia entry for Neuromancer gained sentience and ate the rest of the site. It’s a thrilling sci-fi page-turner where the page-turning has been replaced with hyperlinks, all wrapped in a dense and chillingly plausible vision of the future. It’s a fascinating experiment in narrative design.

Rather than being played through a proprietary engine, Neurocracy is experienced entirely on its own website, which looks and functions almost exactly like Wikipedia, right down to the banner appealing for donations on the homepage. You could probably have an interesting debate about whether Neurocracy qualifies as a game, because it so closely mimics a real website that it basically is one. But it would be debate purely about form rather than a slight against the work of its creators.

The joy of Neurocracy is the same you get from tumbling down rabbit-holes on Wikipedia, where you start off reading the entry of the office of the Home Secretary and end up browsing the list of history’s most notorious serial killers. But there are a couple of crucial differences between how the real Wikipedia and Neurocracy’s facsimile works. Many of the “links” embedded in articles are not direct hyperlinks. Instead, they bring up additional text boxes which provide brief explanations of the relevant subject. The other crucial difference is that the Neurocracy’s page revision history is much more prominently displayed. This is because Neurocracy is structured into weekly episodes, and each “New” episode both adds new pages and updates existing pages with new information, elaborating upon the mystery of Xu Shaoyong’s death.

At the time of writing, Neurocracy is on episode three of 10. This means the number of currently available pages is fairly small, and as such your ability to Internet sleuth is somewhat curtailed. Indeed, if you want Neurocracy to be more of a Her Story-like experience, where you frantically jump from clue-to-clue until you reach a solution, then I’d recommend waiting until all ten episodes are out.

What your get right now is a glimpse into a remarkably convincing alternate future. The world of 2049 is one where China has become a much more actively globalist political entity than it is now, and it’s all because of a pandemic. Not the pandemic, although Neurocracy does include a stub on Covid-19, which is haunting to read about in faux-retrospect. Now the pandemic of the 2040s is Cariappa-Muren disease, caused by a fish-borne neurological disorder transmitting to humans. With memories of Covid presumably still strong, this new pandemic results in the creation of G6, a biosecurity network designed to identify potential pandemic outbreaks before they, well, break-up. But G6’s enhanced networking capabilities (which can link to neural “colloids”, embedded in people’s bodies) prove to have potential far beyond its intent as a contact-tracing system, making it vulnerable to abuse as a tool for surveillance and consolidating state power.

All of this and more is communicated in highly evocative Wiki entries, that convey this colourful and vivid future in Wikipedia’s trademark matter-of-fact tone. Indeed, in some ways Neurocracy is too much like Wikipedia, insofar as I found some of the entries hard to digest. This is partly down to me. My eyes tend glaze over whenever someone starts talking about finance (which probably explains why I am perpetually skint). This made the lengthier entries on Zhupao and Xu Shaoyong’s various business dealings a bit of a slog.

Still, I wonder whether Neurocracy might be better served with more, shorter Wiki entries. As I mentioned earlier, the joy of Wikipedia lies in finding an article, reading it a bit, and then either moving on when you get bored or getting sidetracked onto something else. Neurocracy doesn’t currently have the breadth to do that, and while the entries on Xu Shaoyong and G6 are authentically detailed, you could probably split them into multiple shorter entries that would A) make them easier to digest, and B) keep the reader more actively engaged at this early stage of Neurocracy.

Ideally, I want to be clicking my way through this fictional encyclopaedia, sampling morsels of imaginary fact like informational tapas (which I can then regurgitate to my friends in half-remembered fashion). At this stage, Neurocracy doesn’t quite let you do that. But it’s important to stress that there are still another seven episodes of Neurocracy to go, which will no doubt flesh out both its world and the Omnipedia app considerably. It’s also worth noting that there’s a Discord channel for sharing theories about who killed Xu Shaoyong and why, along with various other little mysteries seeded into the fiction such as what the hell happened in the second season of Are You For Real? Speaking of which, I never did finish brushing up on my AYFR lore. Until next time, folks!