Is The Walking Dead: Saints and Sinners the best VR Game yet? 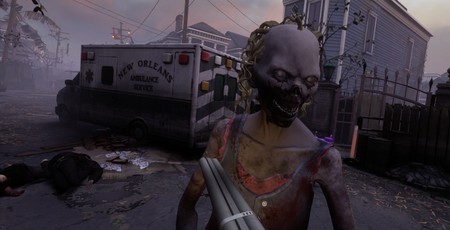 The absolute last thing I wanted to play in 2020 was a zombie VR game. Much as I love VR, it’s still at the stage where gimmicks rule above all, and substantive VR experiences are thin on the ground. Also, I was done with zombies about ten zombie games ago. I’m at the point where stating how done I am with zombie games is a cliché in and of itself. But curiosity got the better of me and I ended up playing it anyway, and bite my neck and call me infected if it isn’t utterly brilliant. It’s not just “good for a VR game”, it’s one of the best zombie games I’ve ever played, and might just be the current frontrunner in the VR space.

The premise is typical Walking Dead fare. You play the role of a survivor trapped in zombie infested New Orleans who hears tale of a secret bunker known as the Reserve. Stuffed full of weapons, supplies and medicine, the Reserve sounds like the perfect place to wait out the end of the civilised world. But there’s a problem. From a contact you talk with via radio, you learn that the Reserve is A) locked and B) flooding with water, and you need to solve both problems before you can call it home. Oh, and you need to stay alive while doing so. On paper, Saints and Sinners is a survival game. Each new day sees you travelling to a different district of New Orleans, where you must complete objectives and/or collect resources which you can take back to your base to craft new weapons and equipment. You’ll need to evade the grasp of zombies, and sneak into houses and factories belonging to aggressive human factions, then get back the boat you use to navigate the flooded city to return your hard-earned resources back to base.

So far, so typical. But the moment first encounter a zombie, Saints and Sinners begins to reveal what is so special about it. See, it’s the first zombie game that makes the act of killing zombies feel as gross and harrowing as it’s depicted in films and novels. There’s a common refrain in zombie fiction, where the first time a survivor has to kill a zombie, they’re reluctant to do so because they can’t get over the lingering humanity of the creature that is now in front of them. Maybe it’s someone they know, or love, or maybe it’s just the knowledge that this thing that’s trying to scoop out their skull was once a person. This is also the point where I’d usually yell “Kill it! Just kill it!” at the TV, before turning to my partner and saying “Well, I’d kill it,” in standard “Man sat on sofa” fashion.

Then you play the training section of Saints and Sinners, which gives you a knife and points you to a zombie that has been rendered harmless by cutting off its arms and sticking a bag over its head. You walk over with your VR shiv and swing your arm to stab at its VR head. But your lame attempt barely scratches its scalp. So, you push harder, grinding your knife into its skull, hacking at it like ice on your drive, and eventually you strike clean through the bone with a horrible squelch. But that’s not the end, now you have to pull the knife back out, and if you don’t tug hard enough, or use your other hand to brace the zombie’s ruined head, the blade might stick. It’s absolutely horrible, a genuinely unpleasant experience. And this is just a training zombie. Trying to brain one that’s scratching at your face with several pals lumbering behind it is a whole different kettle of undead fish.

What Saints and Sinners does is provide a palpable sense of the horror that is killing a zombie. Not being attacked by one, although that’s pretty stressful too, but of actually fighting and overcoming one. It triggers that natural (or possibly socially learned, you’d have to ask a psychologist) revulsion we have of killing another person. I’m aware I’m probably making it sound awful,  but for someone who is exhausted by zombie fiction, having a game communicate why zombies are so horrifying in this palpable, almost instinctual way is really interesting. It’s worth noting that, the comic-book art-style helps provide a little distance, which is good because otherwise it’s probably be unbearable. This isn’t the only intriguing idea that Saints and Sinners has either. For each day that passes in the game world, the available supplies become less, and the number of zombies prowling around increases. By day ten or eleven, you’re fighting groups of zombies where there would previously have been one, for scanter resources than what there were before. This means you have to balance the need to complete objectives with the need to acquire enough resources to sufficiently upgrade your equipment, which in turn makes deciding what upgrades to craft a much more significant factor in your experience.

On top of that, you’re limited in the amount of time you get to explore each day. After about half an hour, one of the in-game factions rings every church bell in the city, which brings every zombie in New Orleans out onto the streets. If this happens, then unless you’re extremely proficient at zombie killing, you’re as good as dead. So, you also have to balance thoroughness when searching for resources with efficiency, making sure you get what you need but not outstaying your welcome. All these different systems come together to generate mounting waves of tension each time you venture out from your base. Something as simple as mis-timing your swing when attacking a zombie can lead to a cascade of consequences that see you running out of town with your backpack only half-filled. On the flipside, there are moments when Saints and Sinners has shades of Dishonored or Deus Ex about it. You might be stood outside a faction stronghold figuring out how best to infiltrate it, when a cluster of zombies comes along and chows down on the men guarding the front gate, opening the way for you.

With a story that lasts about ten hours (and possible quite a bit longer) and a fair chunk of replayability thanks to the ever-changing world-state, Saints and Sinners is one of the deepest and most comprehensive VR games I’ve played. I should note there are some big-ish VR games that I’m yet to try, like Boneworks and Asgard’s Wrath. But that doesn’t change the fact that everything in Saints and Sinners comes together in a way I haven’t seen in VR before, and it uses VR to create a specific situation and generate specific emotions, rather than simply goofing around with a gimmick. Between this and Half-Life Alyx, 2020 could be the year VR comes into its own.