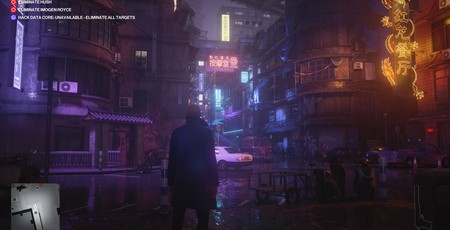 Hitman 3 is probably the best map pack ever made. While technically could play it without experiencing the previous two games, I honestly don’t know why you would. It’s best to think of IO’s World of Assassination trilogy as one (now huge) game, a unique and singular experience that, in all likelihood, will never be repeated again. 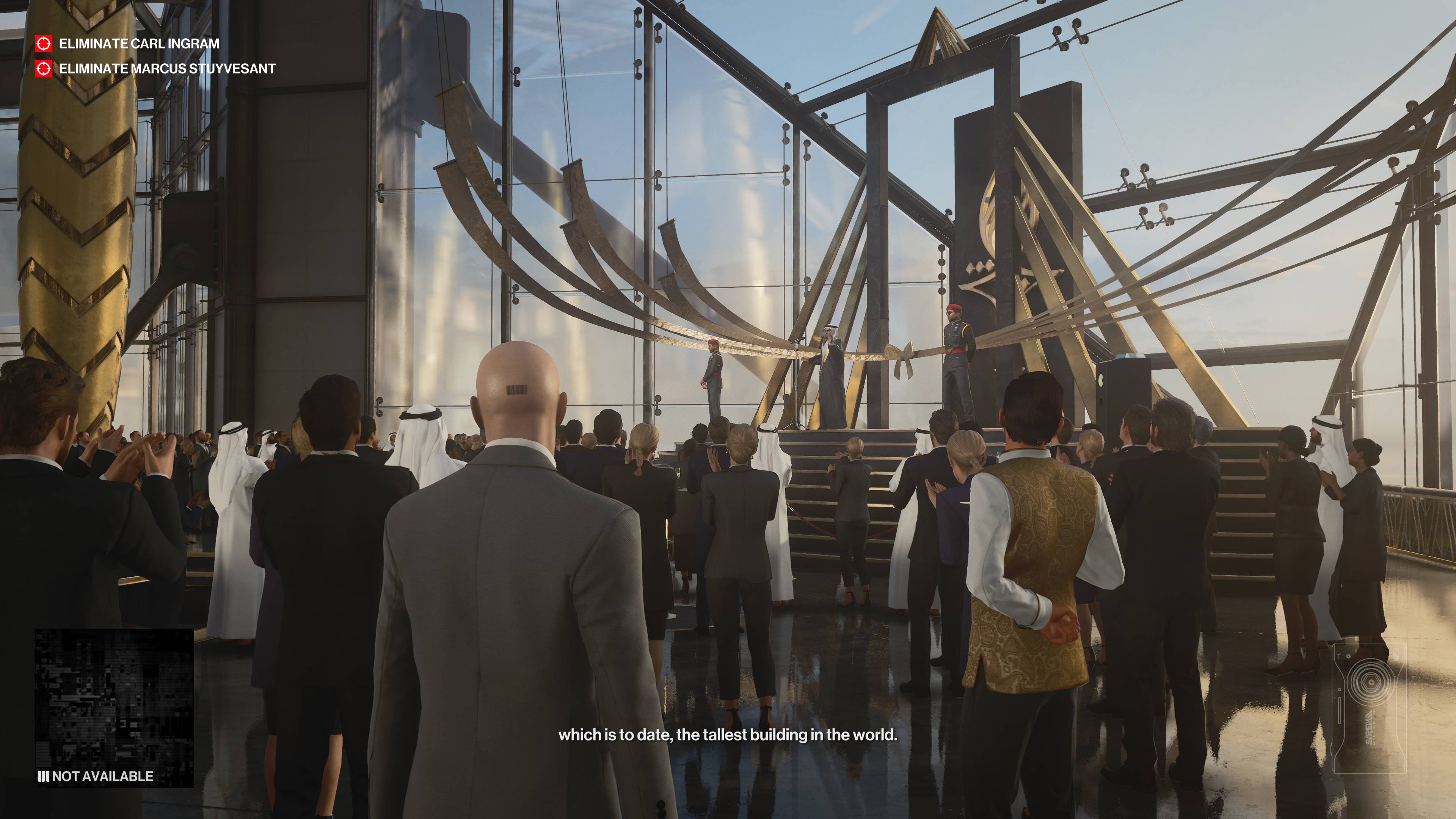 Hitman 3 caps the trilogy off in impressive style. Not only does it show off IO Interactive’s talent for level and clockwork puzzle design at its absolute best, it sees them in a particularly playful mood, joyfully experimenting with the rules and conventions the previous two Hitman games have established. It is rarely less than delightful to watch in motion. Yet while it contains IO’s highest highs, Hitman 3 doesn’t quite maintain that consistency across the whole experience.
It’s difficult to review Hitman 3 without discussing the nuances of its maps, how the new locations play with the structure of earlier levels. These could be considered spoilers, so if you want to go in blind, know that it’s absolutely worth your time and read no further. If you’d like to know more, read on.
Agent 47 final globetrotting adventure kicks off in Dubai, where he’s tasked with offing two of the three leaders of Providence (basically the Illuminati) hiding out in the world’s tallest building (which is *exactly* what the offensively wealthy and powerful would consider a hiding place). Although more compact than the missions that follow, unlike the openers for the previous games, Dubai doesn’t lead you completely by the nose, understanding that you’re likely well-versed in the art of hitting men by this point. For complete newcomers, though, there’s a neat and tidy mission story that lets you off both your targets at once. 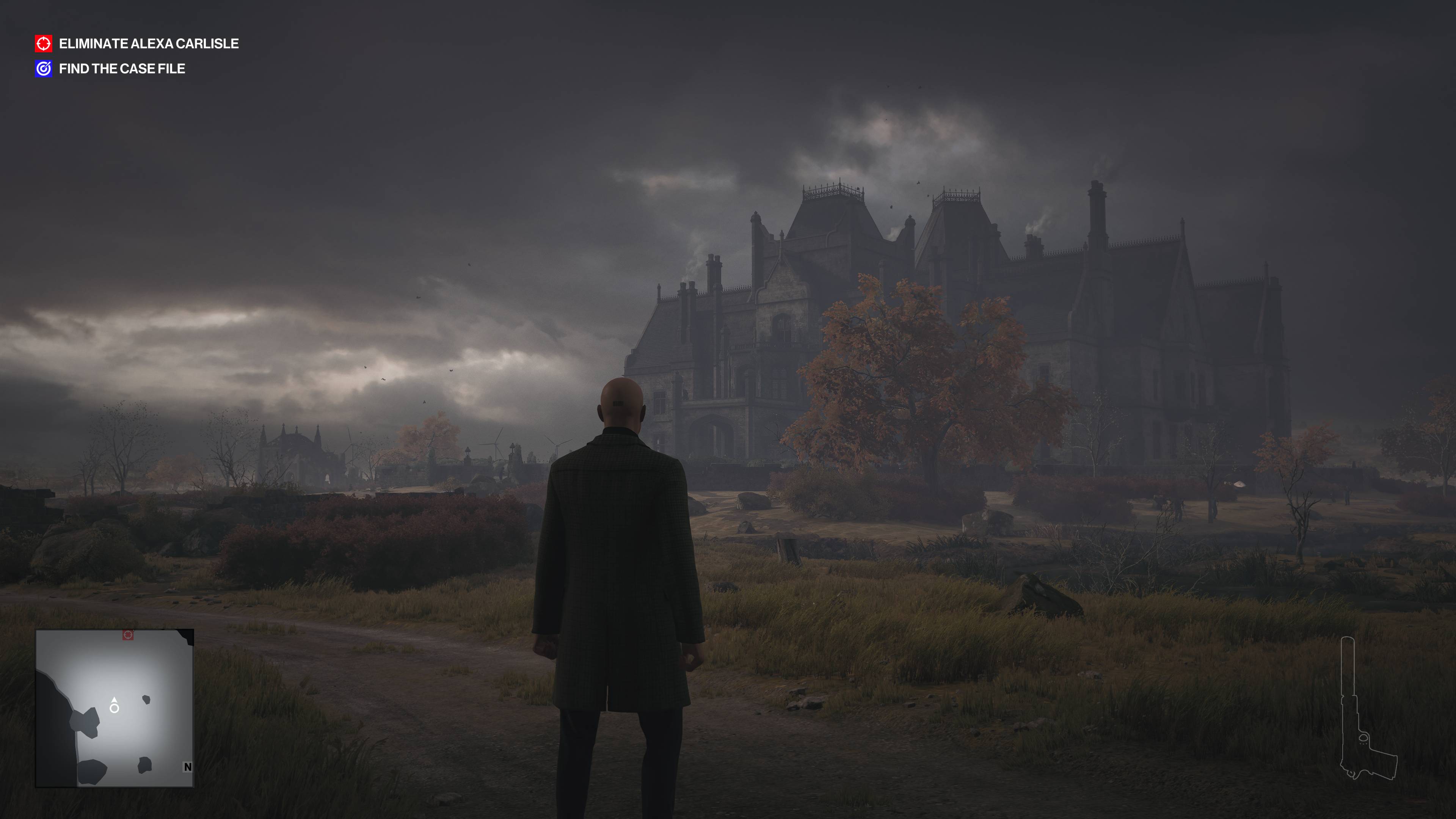 Mission complete, 47 moves on to the exotic sights of Dartmoor, where the last head of Providence’s hydra, Alexa Carlisle, is under heavy guard in her massive gothic mansion. It’s here, in the damp and dismal British countryside, where Hitman 3 begins to twist the knife. See, you’re not the only killer in the mansion. One of Carlisle’s extended family has been murdered the night before you arrive, and if you so choose, you can assume the role of the detective dispatched to investigate the killing, solving the case as a method of getting close to Alexa.
What results is one of Hitman’s most joyfully devious missions, playing out like a rogue Agatha Christie story. The mystery is genuinely fun to investigate too, giving you enough agency to figure things out on your own, but also not letting it distract too much from your primary goal of adding to the deaths in the household. And of course, you’re under no obligation to approach the mission in this way. There are several other mission stories, besides plentiful opportunities to off Alexa on your own initiative. 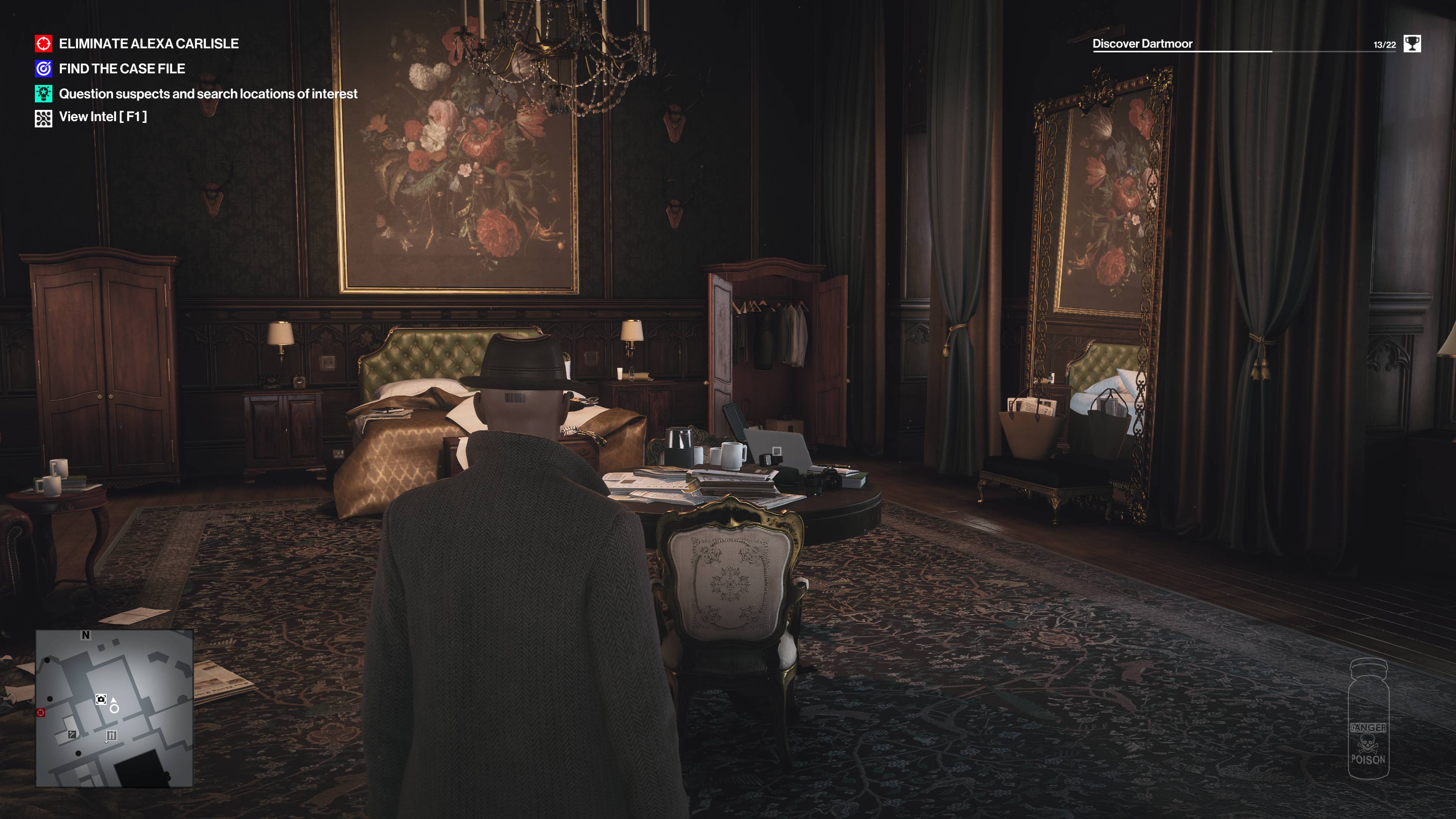 After messing with the rulebook in Dartmoor, Hitman 3 throws it out completely in Berlin. Inside an old industrial estate converted into a thudding underground nightclub, 47 must square off against a throng of rival assassins, killing them before they kill him. The hubbub of Berlin offers a complete change of both pace and structure. There are no mission stories here, no guiding hand to help you, while your targets know what you look like, forcing you to remain vigilant at all times. It’s a challenging mission, but more than that, Berlin is liberating, as you’re given free rein to approach targets as you please, using all the skills you’ve learned up to this point to put down your rivals permanently.
47’s biggest challenge comes in Shanghai, where he’s tasked with breaking into the primary data centre of the ICA itself. Your assassination targets are almost incidental, inconveniences that must be dealt with so you can access the true goal. It’s a heist mission, basically, and a supremely satisfying one at that. There’s also a brilliantly daft mission story where 47 can kill one of his targets with the sheer force of his will. 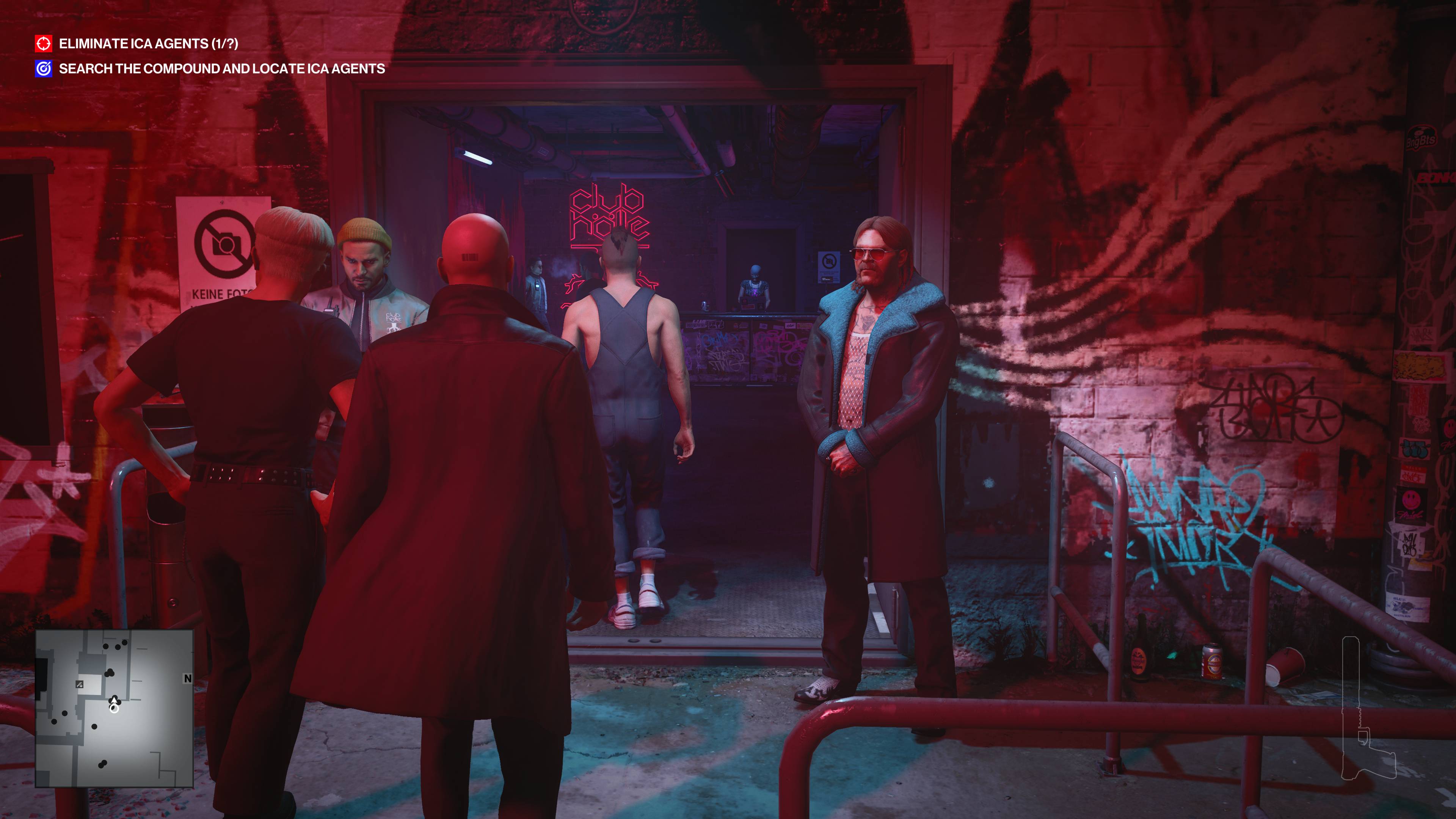 Collectively, these three locations represent the best run of missions across the entire series. Sadly, Hitman 3 can’t maintain that momentum to the end. The fifth mission, which takes 47 to Argentina, is by no means bad, but it lacks the inspiration of the previous three. It does feature one of the best mission stories in the entire game though, involving an earpiece, a melon, and a sniper-rifle. The final mission, however, is an anti-climax, insofar as it isn’t really a Hitman mission at all. It’s basically a linear action sequence with free reign to kill whoever you want. While it can be completed stealthily, you’ve little freedom of approach.
I can understand the thinking behind this. After nineteen missions holding yourself back, living in a constant state of pent-up violence waiting to be unleashed, IO clearly wanted to give the player an opportunity to vent some of that. But that isn’t what most players come to Hitman for, and it’s unfortunate that, when you’re all geared up for the ultimate challenge, Hitman 3 instead caps things off with what’s basically a throwback to Hitman : Absolution (never a good thing to throw back to). 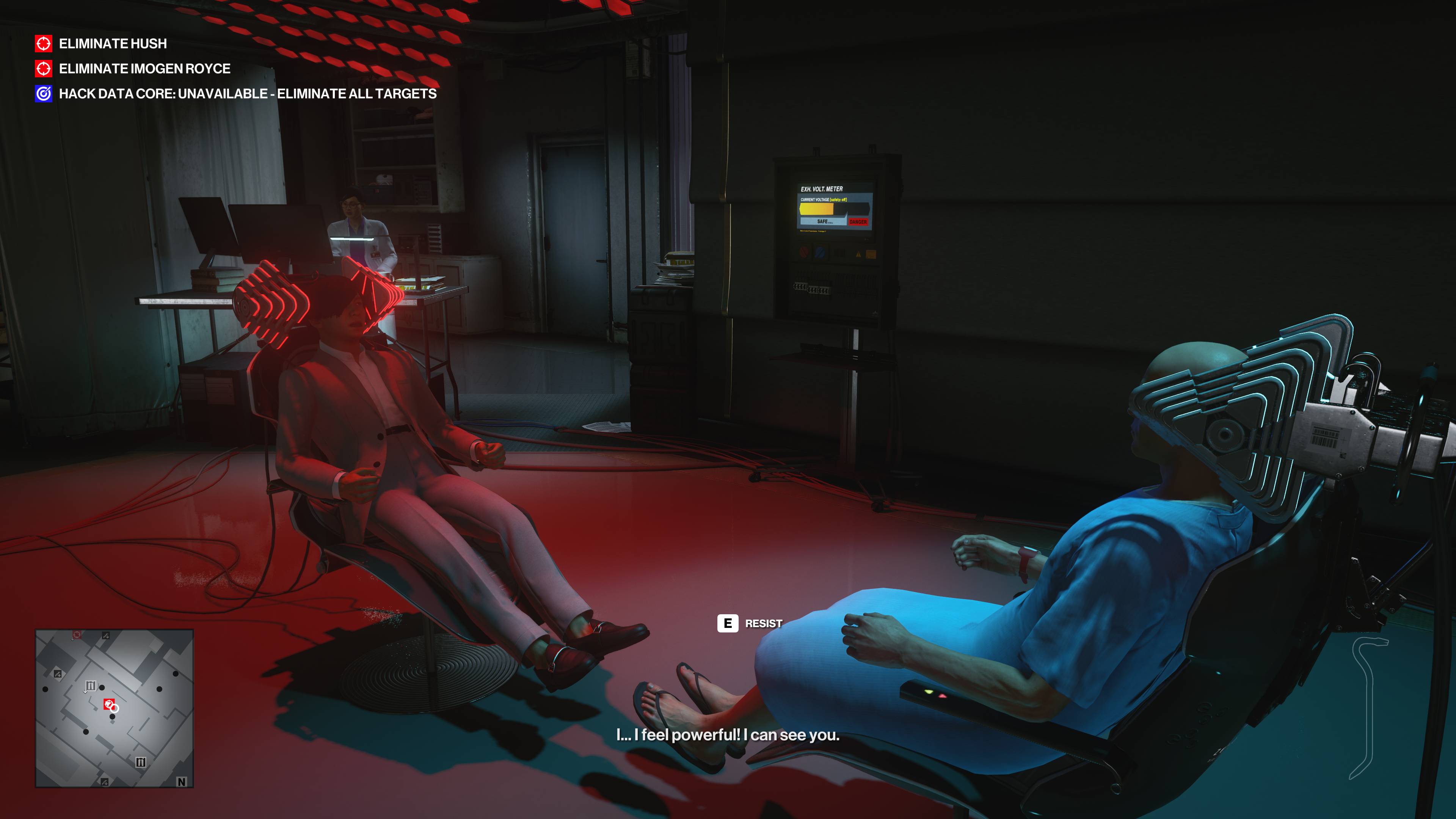 Beyond the slightly underwhelming finale, there are a couple of issues specific to the PC version. On the PlayStation, Hitman 3 ships with a (by all accounts excellent) VR mode, letting you play all the missions from all the games in first-person Virtual Reality. The PC version has no such support for this feature. Meanwhile, Hitman 3’s launch on the Epic Store has caused some problems porting over saves from previous instalments. If you want to carry over your saves from earlier games, you have to visit a special website and use your own account to do so. You also only get once chance to do this, otherwise you’ll have to play through the previous two games again if you want consistent progress.
Hitman 3 is a mostly excellent send-off for Agent 47. But as I said at the beginning, the true quality of Hitman is only visible when you consider all three World of Assassination games together. Nowhere else in gaming will you find such meticulously crafted sandboxes, such rich dynamic puzzles designed not to be raced through and forgotten, but to be played over and over, savoured and mastered. Each game may have its weak spots, but taken together, Agent 47’s deadly world tour is truly a force to be reckoned with. 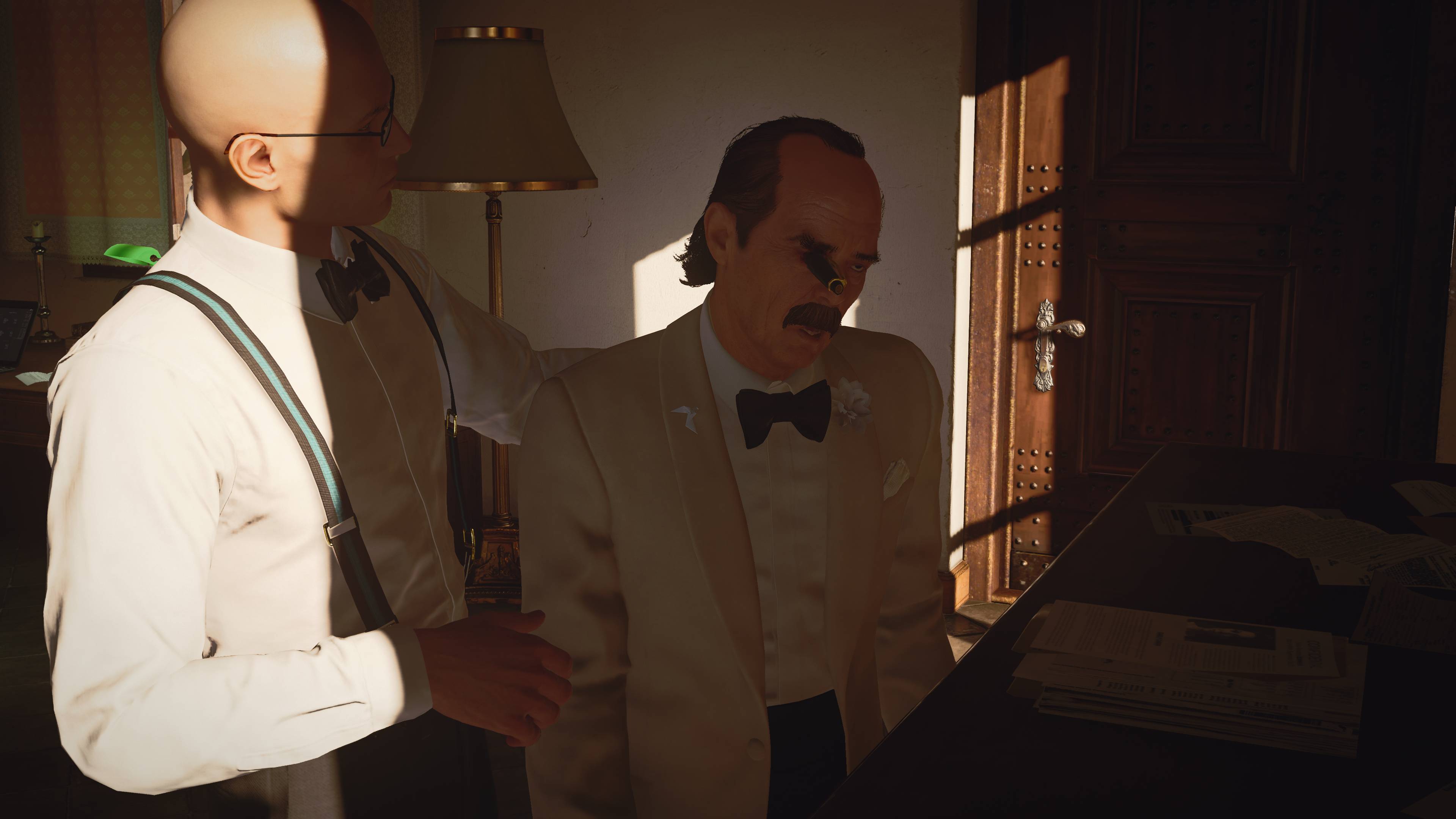