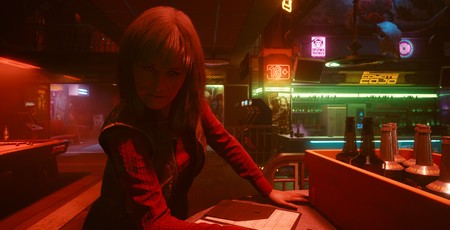 Looking for a Cyberpunk 2077 performance guide? Cyberpunk 2077 is the most technically ambitious game in years, so understandably it is also technically demanding. But as I explain in my review, it has also released in a less-than-optimal state, suffering from both technical and performance issues. Some of the game’s graphical settings will actually make it looks worse, while there are certain PC and graphics-card settings outside of the game that can both positively and negatively affect performance and image quality.

To help you navigate Cyberpunk’s technical quagmire and get the most out of your PC, I’ve put together a quickfire guide to calibrating Cyberpunk in the best way possible. For disclosure, I run an Nvidia GeForce RTX 2080 Super GPU and an% AMD Ryzen 5 3600 CPU, and play Cyberpunk according to the recommended settings (4K resolution, RTX + DLSS on). 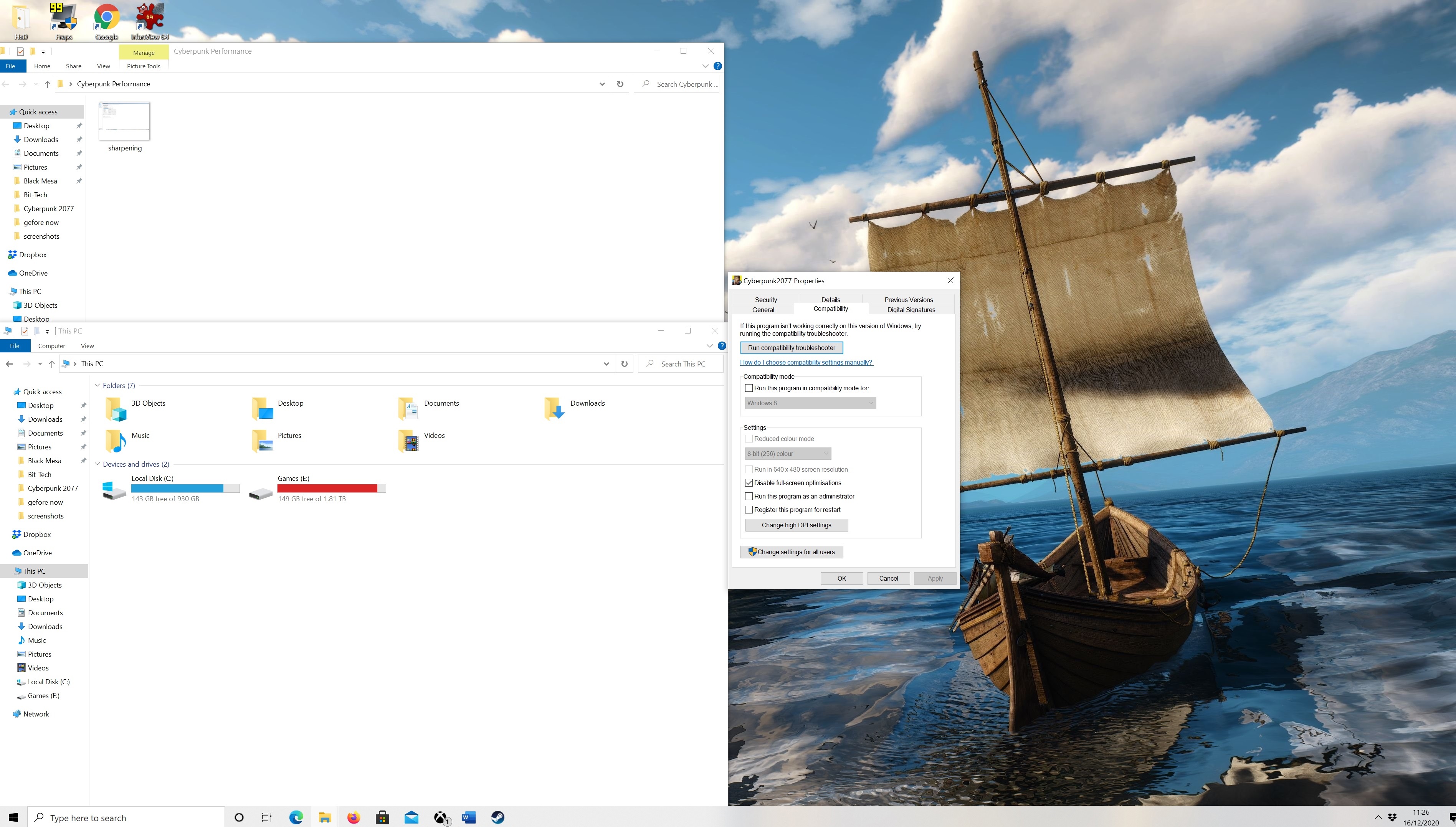 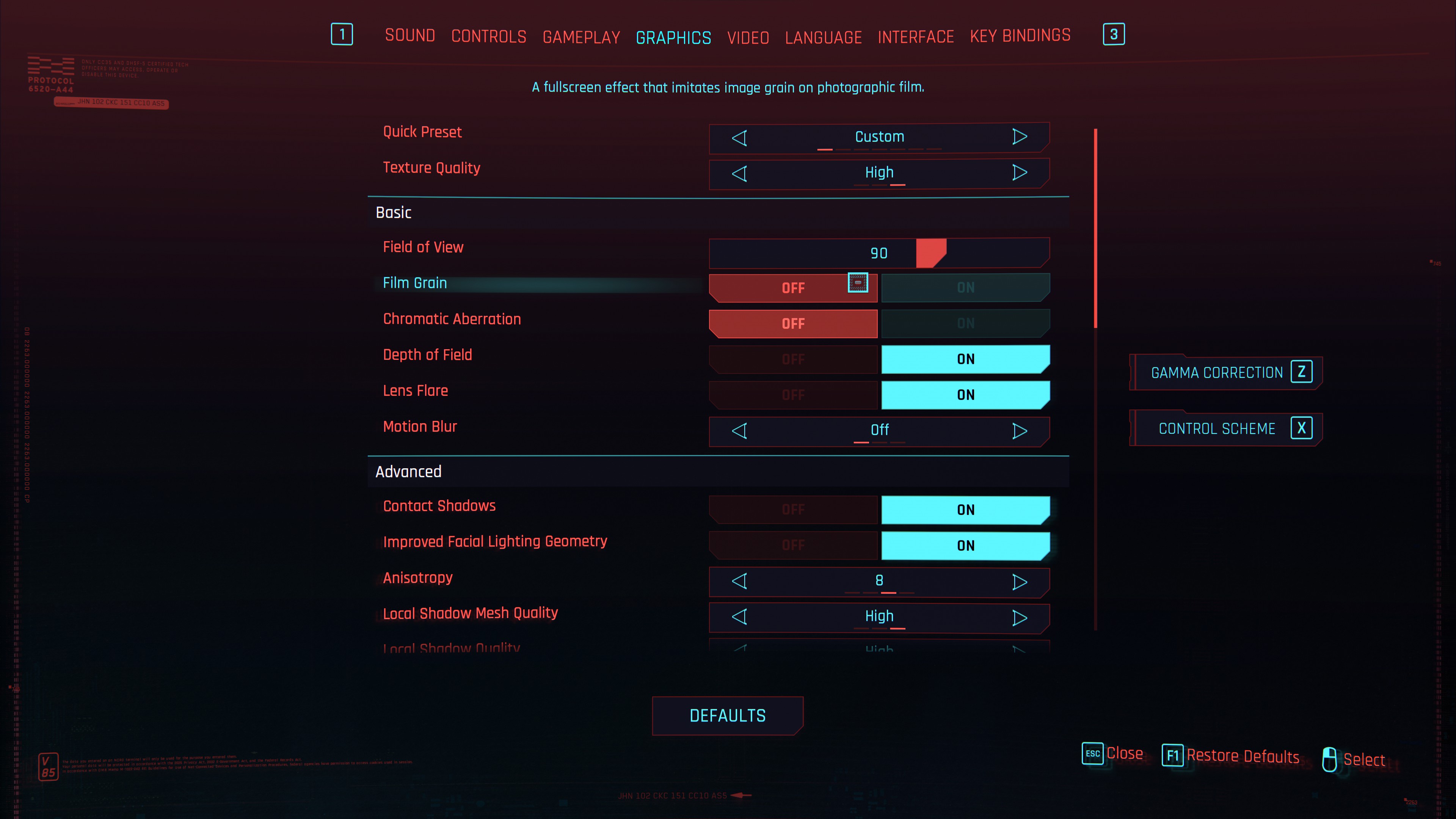 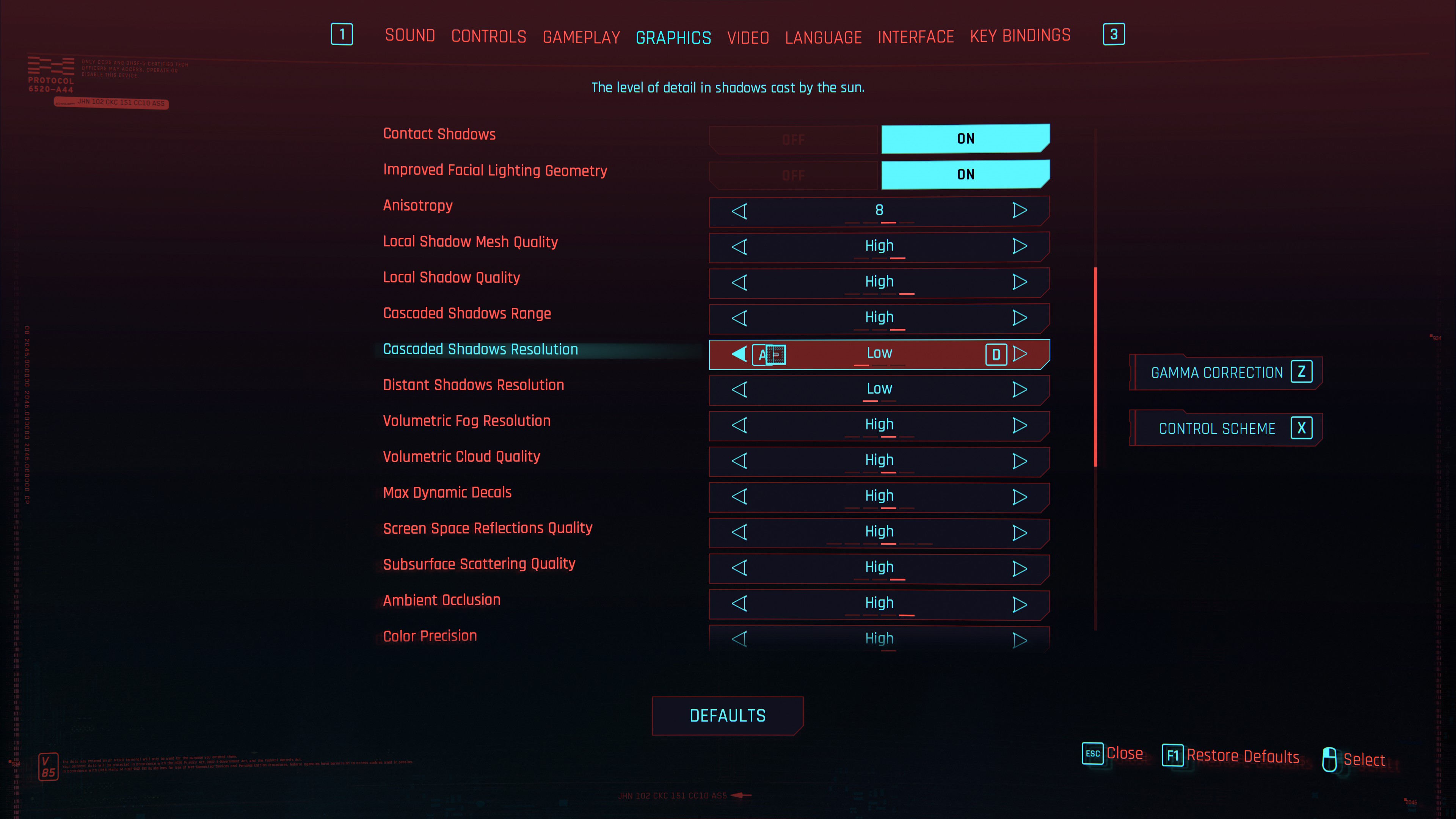 Set Cascading Shadow Resolution and Distant Shadow Resolution to Low
Altering most of Cyberpunk’s core graphics settings won’t have a massive impact on performance, but there are a couple of major exceptions. The biggest hitters on performance are Cascaded Shadows Resolution and Distant Shadows Resolution. Both of these affect shadows cast by the sun, such as on NPCs walking in sunlight.
Like fullscreen optimisations, setting these to low can increase performance by around 15 FPS, for the relatively low costs of slightly blurrier shadows. If that still isn’t enough for you, also consider reducing Screen Space Reflections and Ambient Occlusion, which should gain you a few extra frames. 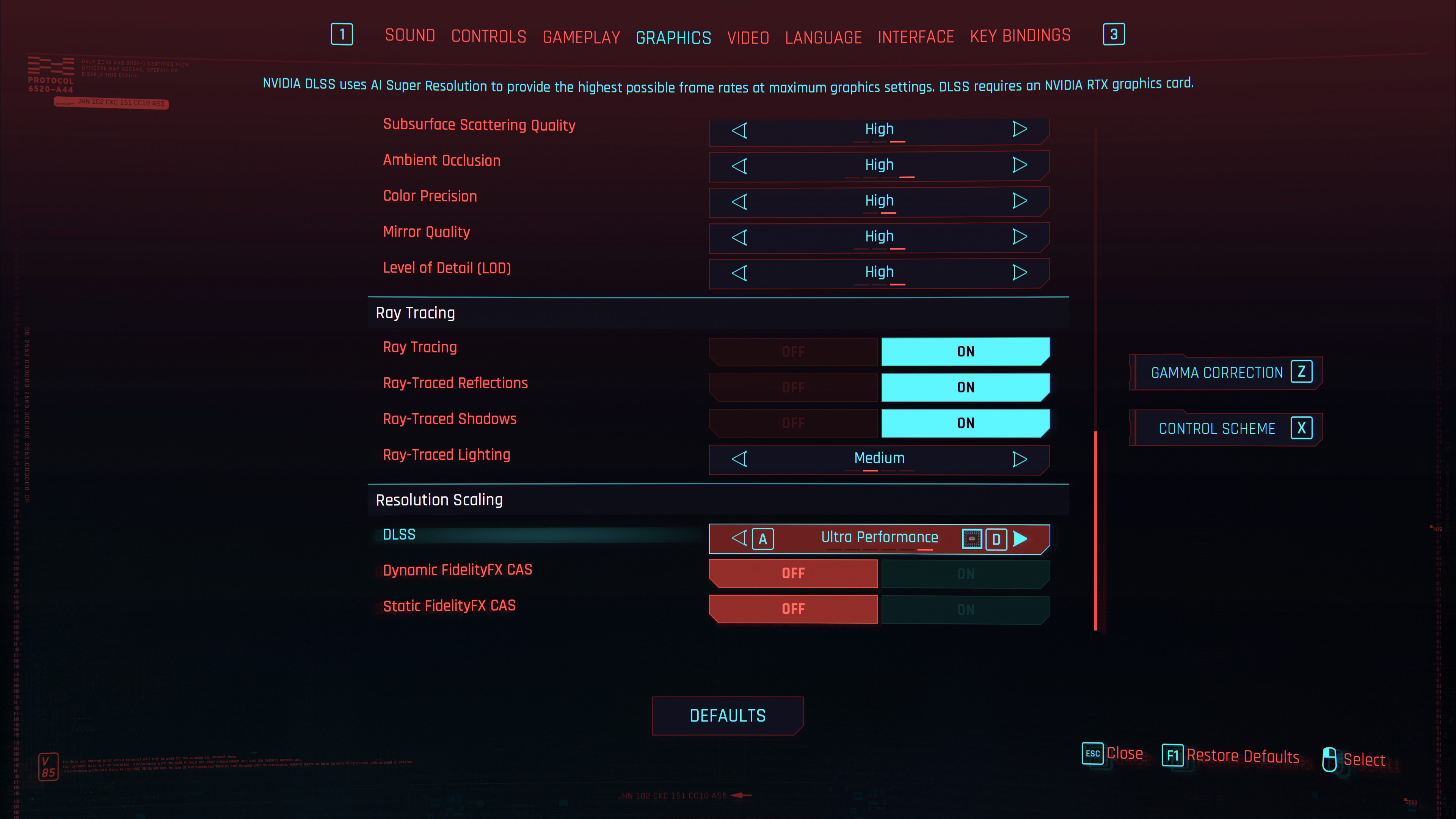 Set DLSS to Ultra Performance
Cyberpunk was designed specifically with ray-tracing in mind, and it looks genuinely astonishing with RTX on. But ray-tracing is by far the most performance-expensive setting of the lot. If you’ve got an Nvidia card, however, you can utilise DLSS. This internally lowers the in-game resolution, then uses AI algorithms to upscale it to match that of your screen. This massively reduces the performance costs of ray-tracing, and the resulting looks almost identical to that with DLSS switched off.
Cyberpunk has multiple DLSS settings designed to let you tweak between image quality and performance. But frankly, you’re best gunning straight for “Ultra Performance”, as it doesn’t make a huge amount of difference to image quality, and there are ways you can compensate for any noticeable blurriness (see below). 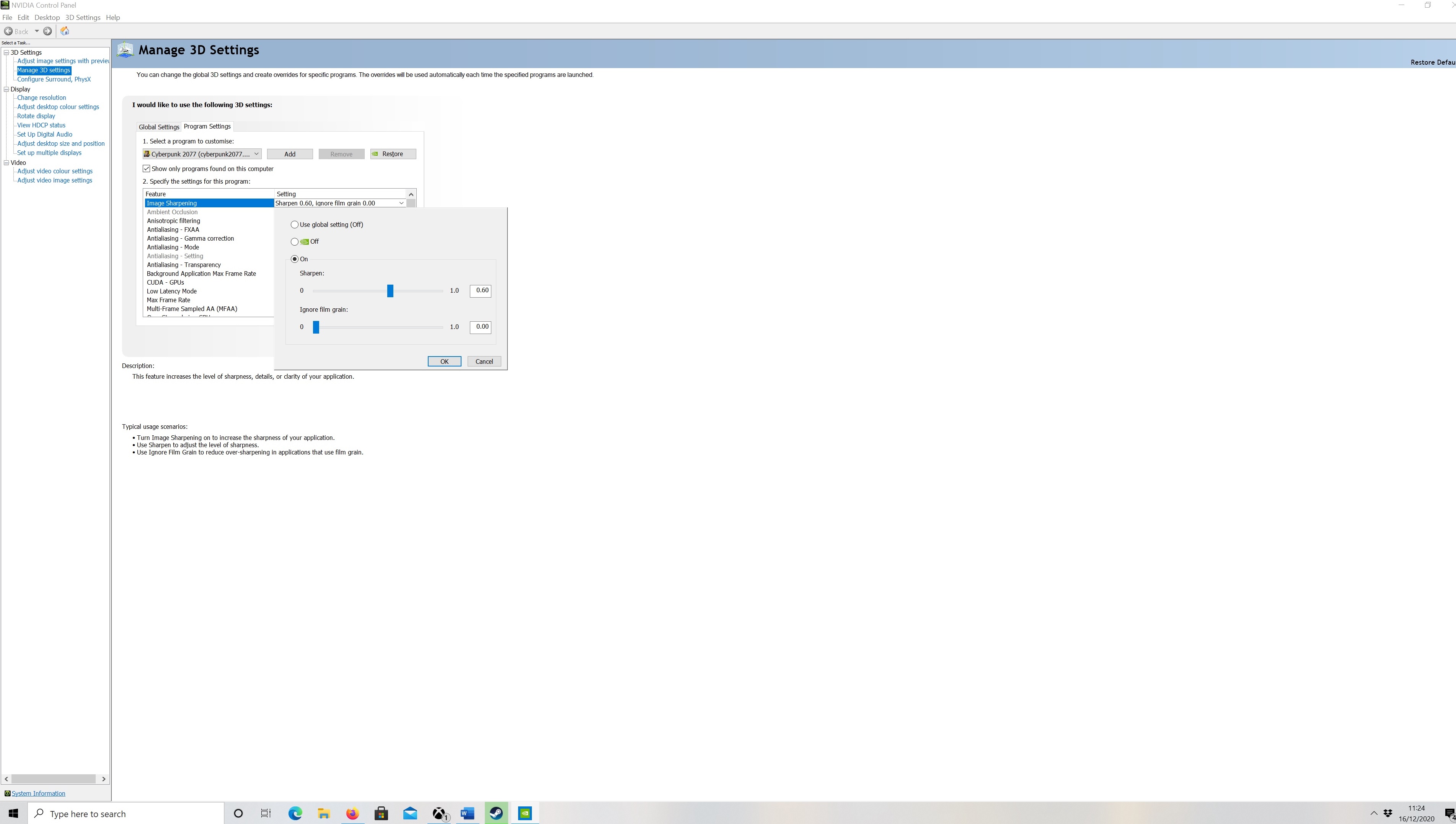 Switch on Image Sharpening in the Nvidia Control panel
Another trick specific to Nvidia cards. If you find that maxing out DLSS makes the image look blurry or washed out, you can use Image Sharpening to compensate. Simply head to your Nvidia control panel, add the Cyberpunk 2077 executable to the list of available games, then scroll down the menu and select ‘Image Sharpening’.
You may have to tinker with the slider to make it look right for you. Over-sharpening the image can make it look noisy. So, if you see a lot of “glittering” on small objects or the ground, that would suggest you’ve gone too far. As for the “Ignore Film Grain” slider, set this to zero, as you should have turned off Film Grain in the game settings, so there’s no need to use this.

Adjust the memory pool budgets
A few days ago, Reddit user ThePhoenixRoyal noticed that the PC version of Cyberpunk is calibrated to only use the same memory pools as the Xbox Series X and the PS5, meaning that, depending on your rig, a large amount of your RAM and VRAM could be going unused by the game. Some players have found that manually adjusting this has resulted in significant performance boosts.
To do this yourself, you need to locate the memory pool budgets file in Cyberpunk’s “Engine” folder, and alter the allocations to match your total VRAM and around half your existing RAM (leaving enough for Windows). Detailed instruction can be found here. Note that this may affect the stability of both Cyberpunk and Windows in general, so proceed with caution. Also, you’ll need to reset these configurations if the game receives an update, which is frustrating, but worthwhile if it provides a smoother overall experience. 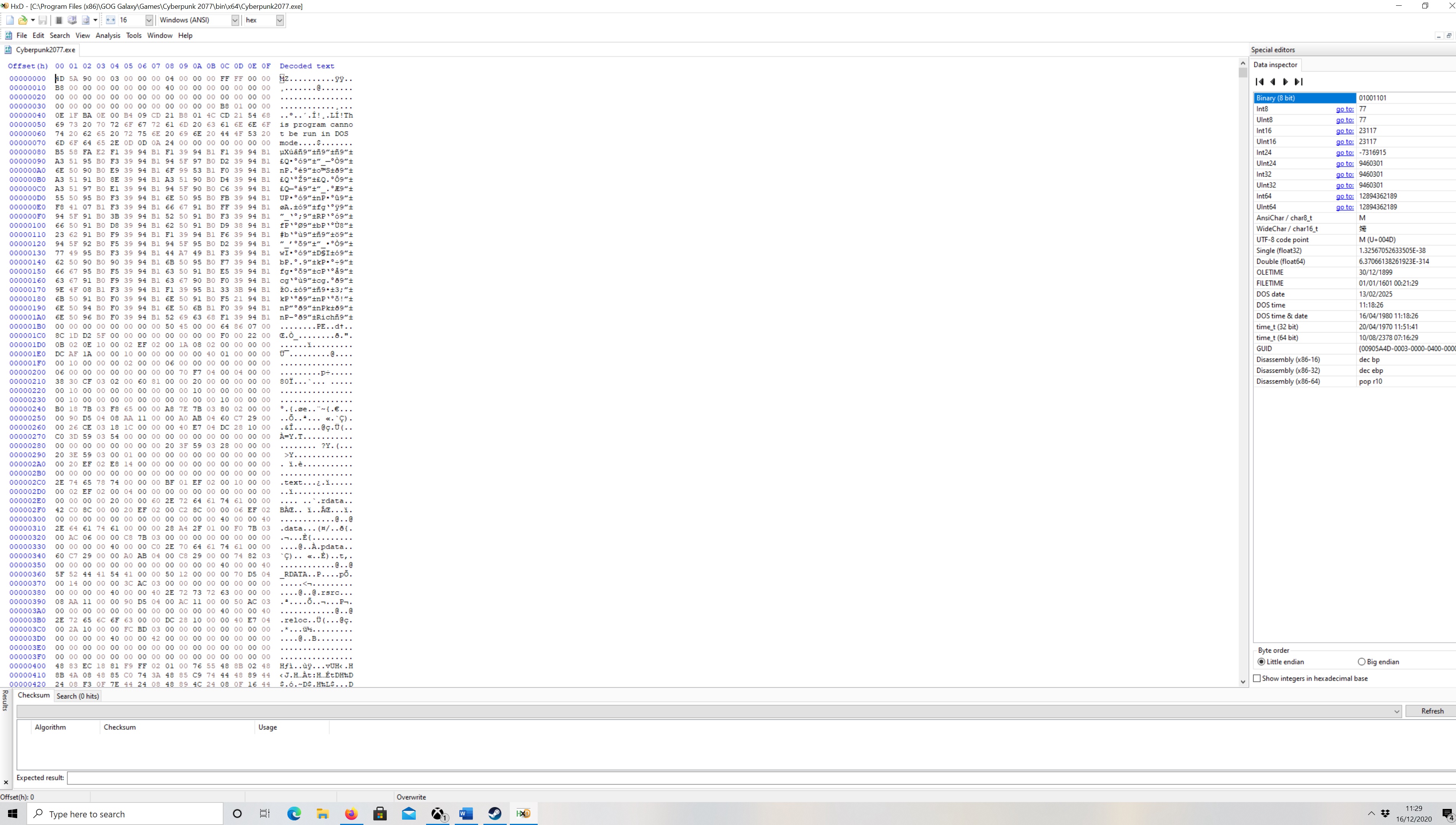 Hex patch the exe file to improve AMD performance
Alongside the iffy memory-pool settings, it’s also been noticed that Cyberpunk doesn’t fully utilise AMD CPUs. Fortunately, this can be fixed, as well, by opening up the Cyberpunk.exe file using HxD Hex editor (free to download here), and switching out a line of code. AMD users have reported not only improved performance by doing this, but improved performance on higher settings than they were currently using.
Full instructions on how to do this can be found in this reddit post. Ensure to make a copy of your Cyberpunk executable first, in case you make a mistake.