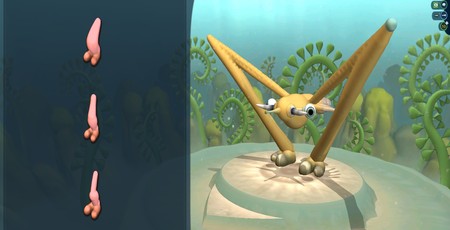 I remember Spore as one of gaming’s most notorious flops, a classic case of a hype bubble that blew too big and then burst spectacularly, covering everyone in a thin and sticky film of anger and resentment. It was the No Man’s Sky of its day, or the Daikatana of the future, another game that dreamed too big and delivered too little. That’s what my brain tells me. Steam, however, seems to remember things differently. At the time of writing, Spore has 14,060 user reviews on Steam, which aggregate to a 'Very Positive' rating. 'Used to love playing this back in the day,' recalls user Rikimaru, while Pyromancer states, 'Great game, even after 10 years.' User Theondrew is particularly complimentary, stating 'I made a moving penis and make it eat with its balls. this game makes your dreams come true.' An unusual statement, but undoubtedly a positive one.

All told, 87 percent of Steam’s user reviews of Spore are positive. Amusingly, this tallies almost precisely with the acclaim Spore received in 2008. Critics awarded it an average score of 84 percent, according to Metacritic, and were much derided at the time for doing so. That’s not a Daikatana. That’s not even a No Man’s Sky (which I actually think is pretty good, if not 87 percent good). That’s the metric of a great game, verging on an excellent game. What the hell happened? Have these people gone mad with nostalgia? Or, and this might be terrifying for some to concede, but were the critics right all along?

As is so often the case, the answer is more complex than either of these suggestions, hinging largely upon how willing you are to buy into Spore’s premise. One of the most common criticisms of Spore upon release was that it wasn’t a game, but five mini-games stitched together. I don’t think this criticism is entirely accurate, but there’s a kernel of truth to it that hints at the actual element of Spore that makes it so divisive. It’s worth going over that premise again. Spore was the brainchild of gaming icon Will Wright, and as with nearly all of Will Wright’s games, Spore is a life simulation. Rather than simulating lives plural, as Wright did in games like SimCity and the Sims, Spore simulates Life singular. All of it, the whole shebang, the bizarre phenomenon which, so far as we know, only exists on our own planet.

Of course, Spore ignores that last and annoyingly enduring fact. Instead, it posits that life is threaded right through our galaxy, and you will get to interact with it. Eventually. First though, you’ll need to spend a few billion years evolving from a blob of organic matter in the ocean. I still love the first stage of Spore, that simple, Pac-Ma- like feedback loop of swimming around a primordial sea on some distant planet, gobbling up bits of vegetation or other equally tiny critters. Munch on enough food and you’ll grow slightly bigger, and bigger, until you become large enough to sprout legs, and clamber onto land for the next stage of your adventure. Some people criticised the Cell Stage for being too simplistic, which given the subject matter is pretty daft. Maxis knew that nobody would want to play as a cell for very long and so rightly kept things short and straightforward.

After the Cell Stage comes the Creature Stage, which lets you gets properly hands-on with Spore’s still-incredible creation toolset. It sees you wandering around collecting various body parts and attaching them to your increasingly be-limbed creature, while attempting to impress or intimidate the other creatures around you to evolve as the primary intelligent species on your planet. Here we see the first inkling of where opinions of Spore divide, namely between those who play it for creativity and those who play it for challenge. Spore’s creation toolset lets you devise pretty much any kind of creature you like – which inevitably resulted in many phallic aliens such as Theondrew’s testicle-toothed monstrosity. But if you’re the kind of person who enjoys Minecraft as a survival game more than as a Lego set, then you’ll find Spore much harder to get on with. That said, one neat element of the Creature Stage is the universe around you is not static, which means you’ll often get spaceships turning up to abduct creatures from the surface.

Once your creature’s skull-jelly has advanced enough to produce self-awareness, the game moves on to the Tribal Stage. Unfortunately, Spore’s own evolution isn’t anywhere near as consistent as that of your creatures. Both the Tribal Stage and the Civilisation Stage are by far the weakest parts of Spore. Again, the goal is to dominate either other tribal villages or other city states through “good” or “evil” means, but there’s little in the way of mechanical depth to either of these games. Spore attempts to address this by leaning even harder on its creative toolset, letting you create buildings and a host of vehicles in the Civilisation Stage. Doing so seems rather pointless, however, given that both these stages are unlikely to last more than a couple of hours. At this point, however, Spore does something remarkable. It literally shoots for the stars. I don’t’ think we give enough credit to Spore’s Space Stage, which offered plays a fully rendered galaxy to explore six years before Elite Dangerous, and eight years before No Man’s Sky. It’s a proper space sim too, letting you explore, trade with other cultures, engage in diplomacy with them, and of course, fight them. It also lets you do things that are still more or less unique in gaming, such as terraforming planets, and abducting other species.

It is ridiculously ambitious. So why don’t we look back on it with the reverence that Steam users apparently do? There are a couple of reasons. Firstly, the focal point of Spore is wrongly placed. This is supposed to be a game about the evolution of life, but really the evolution aspect is almost a really long tutorial for that massive Space Sim at the end. Secondly, Spore oversimplified nearly all of its mechanics, trying to dilute every action into a handful of mouse-clicks. I think this is perhaps Spore’s biggest mistake; in trying to make its grand idea accessible, it oversimplifies everything, particularly interactions, with the result that the player’s experience of the simulation feels much shallower than what the game itself is capable of. Is Spore worth playing today? If you haven’t tried it before, I’d say so. It feels like a game that could have resulted in a very different industry, had it been a little deeper, a little shinier. There’s an optimism to Spore that I think the industry could do with more of today. It’s not and never will be the masterpiece we might have hoped for, but nonetheless, its evolutionary journey is worth taking at least once.